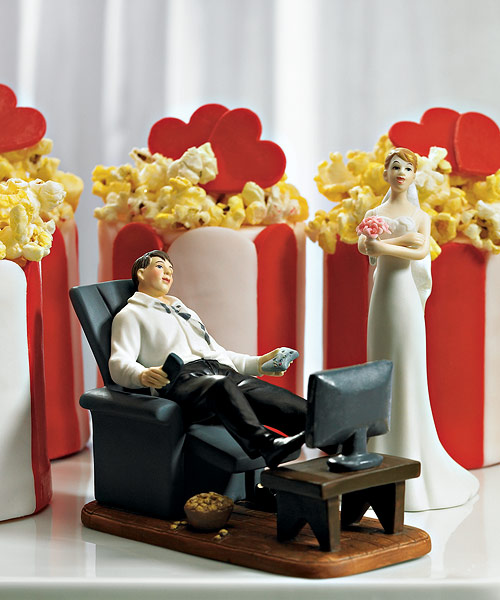 Can’t believe your little sister is marrying that lazy slacker from down the block?  Wedding cake topper turns “wedding stopper” with the Couch Potato Groom Figurine, which realistically depicts what’s actually going to happen after her wedding is through.

Retailer Things Festive thinks this is supposed to make the “forever on his ass” groom laugh at his own folly.  Seriously, the dude already knows what’s going down after they move in to that new apartment – he’s going to plop down on the sofa and play Modern Warfare till his fingers bleed.  Maybe take a break, too, when they show the Jersey Shore marathon on MTV.  Super fist pump, baby!

Made from hand-painted porcelain bisque, the 12 x 14 cm (L x H) “Couch Potato” Groom Figurine portrays the sad life that awaits your baby sis in her domestic bliss.  Bride stands cross-armed with her bouquet in one hand, while the groom lounges on his La-Z Boy, holding a remote on one hand and a console controller on the other.  He even has his feet resting on the TV stand to punctuate the point. 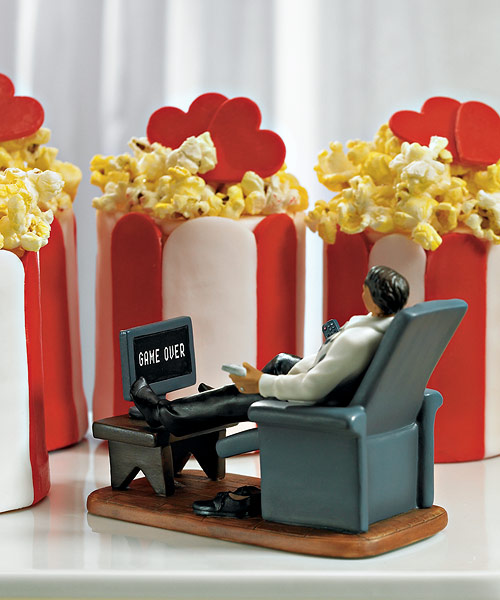 Can this succeed in eking out a Game Over for the wedding you dread?  We’re not sure.   If the nuptials manage to push through, just shrug your shoulders and forget the whole ordeal, preferably over a game of Modern Warfare 2 till your fingers bleed or a marathon viewing of Jersey Shore on MTV (yep, just like your new brother-in-law).  The Couch Potato Groom Figurine is available for $24.