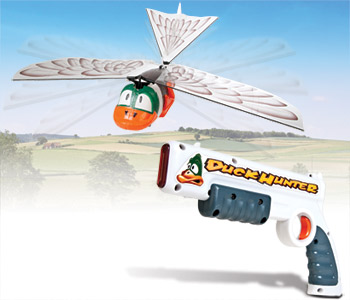 Video games are usually based on real world activities, not the other way around. The new Duck Hunter toy, however, takes the exact gameplay from the classic arcade shooter and brings it to life.

With an infrared pistol in your hand and an ornithopter robot duck autonomously flying across the room, the new Duck Hunter lets you recreate the video game in live action.  Instead of a series of ducks flying past your visible range, the lone target takes to the air in random patterns for up to 40 seconds at a time.  Your goal is to hit it three times before the time is up, at which point it runs out of power and lands.

Like all ornithopters, the ultra-light duck manages to get up in the air by flapping its wings.  Its flight path can be adjusted (circular or linear) with a switch on the body, while requiring a 10-second charging (via a dock on the gun) before being let loose.  Your weapon, on the other hand, takes three AAA batteries, and comes with both  non-functional pistol-pump action and bullet sound effects.

If you want to take the duck hunting to real life but neither own a gun nor have the inclination to stake out the fowl’s habitat, this new game should offer a nice alternative.  You won’t be bringing any animals home for dinner, but shooting a creature flying around your living room sure sounds like a nice way to spend an afternoon anyway. Duck Hunter, the indoor-flying physical version, is available now for £29.99.

[I Want One Of Those via Red Ferret]