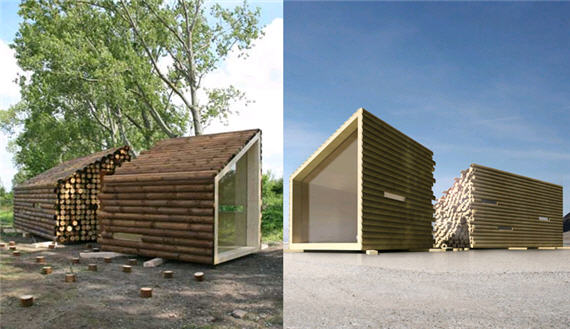 Want to build a portable log cabin?  Hmmm… something about that idea defeats the whole notion of a rugged home in the outdoors.  Good thing the OLGGA design team didn’t ask me first – I would have objected violently.  Instead, they just went ahead and designed the Flake House, a portable home concept that merges log cabin sensibilities with French architecture.

Thinking about log cabins brings me images of the wild outdoors, men bruising their palms putting together a house with their hands.  To be honest, the last thing I associate with that is avant-garde French architecture.  For that reason, a combination of the two is a painful concept to wrap your head around – the mere mention, in fact, makes me want to kill myself.

Fortunately, the Flake House, which is just a fake log cabin, isn’t as bad as I imagined.  The house itself is made of regular wood,  with the logs cut and attached all over the structure’s exterior surface, creating the tacky log cabin effect.  Oddly enough, it doesn’t even try to look like a log cabin – instead, it actually appears as a stack of freshly cut timber when viewed from the non-windowed angle.

Designed as an exhibition piece set to show at the Festival Estuaire 2009, the two-piece Flake House will go on auction at the end of the event.  Those planning to put up a log cabin soon may want to give it a look.