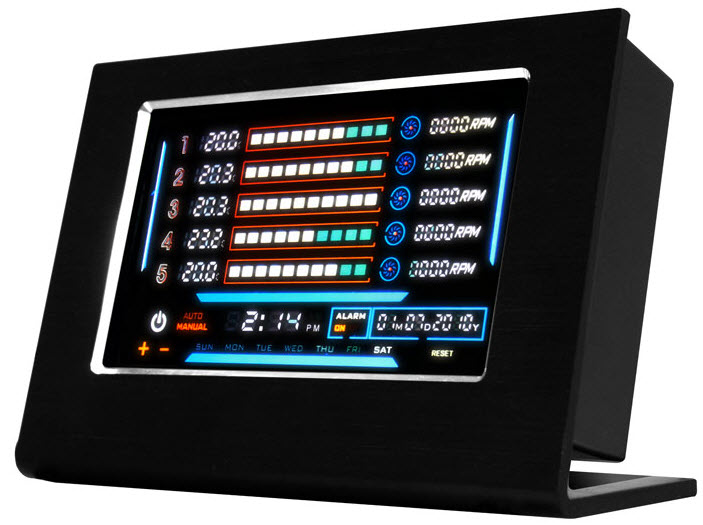 Sure, you can control the same thing right from your computer.  But who really wants to switch to a new window in the heat of a game just to check how much time they have before the system shuts down from overheating?  How about a case with a temperature controller in tow?  C’mon. Reaching under your desk to check and adjust things is just as inconvenient.

The NZXT Sentry LXE connects to your computer via a bundled PCI card, instead of going into one of the front slots like typical controllers.  Armed with five temperature probes, it will keep tabs on the thermals throughout your machine.   The screen (which looks straight out of a spaceship’s control system, by the way) shows temperatures in C/F and RPM speeds for up to five fans, along with time and date information.

Using the touch interface, you can control fan speed to correspond to a targeted temperature, adjust your CPU overclocking or set the case to work quietly.  Since it’s got calendar and clock functions, you can also use it to set time-specific alerts, apart from the default alarms that get triggered when the system reaches a user-configured temperature.   To top it off, all this goodness is clad in a sleek brushed aluminum body that won’t look a single bit out of place on your gaming desk.

No word yet on exact availability or pricing for the NZXT Sentry LXE, but this looks like it’s going to be awesome.