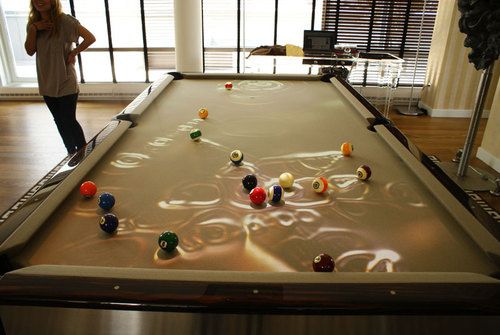 Luxury has always been a double-edged sword, often teetering in the fine line between indulgence and absurdity.  Same thing here with the Obscura CueLight, a digital installation that makes your regular pool game look like it came straight out of a 3D video game.

The Obscura CueLight seen here is only one of two similar systems in the world, set up as part of Esquire’s Ultimate Bachelor Pad promotion.  Apart from the water ripples (as are in the photos), it can also display flame tracks behind the balls.

Strangely enough, the secret to the enthralling visuals isn’t even the pool table, as most folks would assume.  Instead, those water-like splotches on the table surface are displays from an overhead projector, which dynamically alters the beamed images using a sensor that tracks the position of the balls. 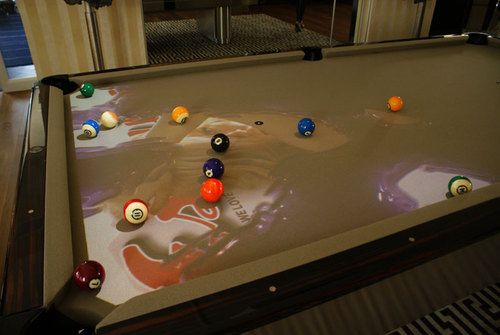 The cost of a high-definition projector, ball-tracking hardware and a custom software system for managing it all?  An eye-popping $80,000 (if you can believe it) and that’s not counting the pool table.  Esquire’s exhibit has it bundled with a $125,000 pool table, in case you’re wondering.  We suppose, though, that it should work with less expensive units, provided that you use a surface canvas that can properly show the projected images.

While the current setup is all about offering some visual delights, future iterations of the system could prove a bit more utilitarian.  According to its creators, the Obscura Cuelight should soon be able to draw lines on the table, showing exactly where to hit the ball to make the shots.

That should be interesting, provided they can manage the AI necessary to make it happen.  Hopefully, they’ll steal “Bata” Reyes’ pool brain so we can try those triple-banked combination shots ourselves.  Not holding my breath for it, though.  Even if they did, $80,000 is a little out of my price range anyway.