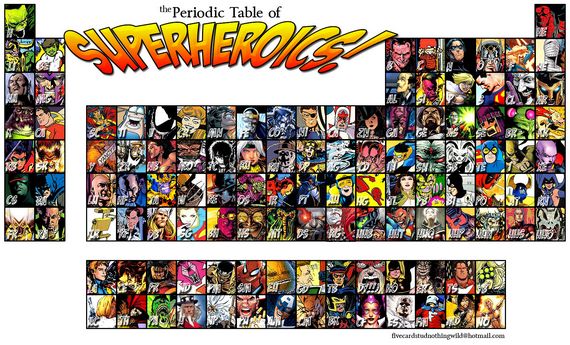 I flunked Chemistry twice in high school.  I had a friend who flunked CHEM 101 three times in college (he got kicked out, boo-hoo).  Needless to say, that old chart of earthly elements regularly figure among our worst nightmares.

Similarly challenged individuals need not fear the Periodic Table Of Superheroics, however.  While it’s arranged like that old elements chart, it replaces the boring chemical definitions with pictures of comic book superheroes, whose names somewhat resemble the original abbreviations.

The H symbol, for instance, now stands for the Hulk, Mg for Magneto, Ir for Iron Man and so on.  It’s probably one of the coolest things anyone’s ever done with a periodic table and I can’t take my eyes off it.  In fact, I’ve already coopted it and turned it into my wallpaper.  If the dude who crafted this thing isn’t selling it as a bootleg poster already, he better start immediately.  This thing looks so hot, I’d venture that somebody’s stealing it with the intent to profit right as I post this.

In case you can’t make out the who’s who of the fanboy heartthrobs splattered across the cells, you can check out the full list from the originating site.  Glad to see some old favorites (like Evil Ernie) among the pics, although I must admit that I’m down to an F again if this were a test.  I have no idea who half of the featured two-dimensional characters are!

Now, how about some crafty Photoshop dude fix me up a Periodic Table Of Adult Film Stars?

[Full Size Image via You Bent My Wookie]