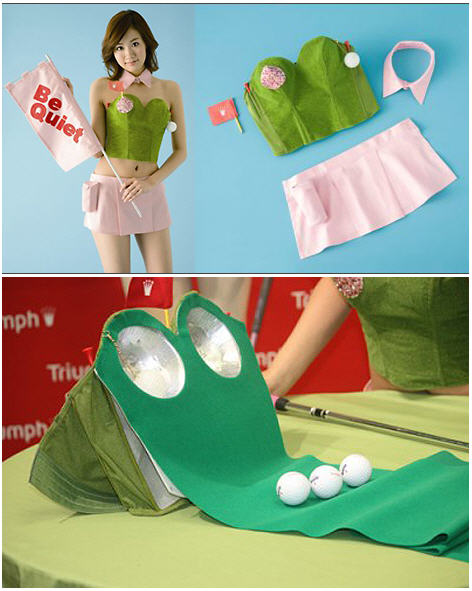 Triumph’s previous efforts on concept bras were so stupid, it was certain they were going to stay as concepts for a long, long time.  Their latest, the Nice Cup In Bra, looks no different, touting undergarment that doubles as a putting green when you take it off.  Huh?!?

You heard that right.  The half-ridiculous, half-inane creation features a green-grass top that transforms into a putting green as soon as you remove it.  It may not look very comfortable while wrapped around that model’s body (it looks like a body cast), but it conveniently unfolds into a 1.5 meter mat where you can practice your soft stroke. 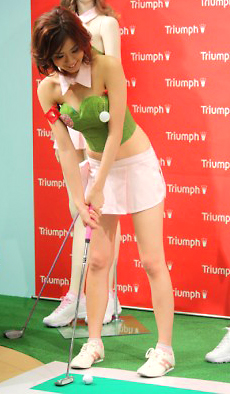 In putt-putt mode, the Nice Cup Bra uses the cups as holes, which should prove a disaster if you’re especially endowed.  Every shot, a hole in one – yay!  Once you sink a putt, a built-in speaker declares, “Nice shot!”  As a bra, it incorporates a couple of golf-centric additions, including a detachable flag pin that comes with a pencil tip (so you can write down scores) and pockets for storing extra balls and tees.

To complete the package, Triumph threw in a pink skirt into the set, with the words “Be Quiet” printed across the back.  When removed, it can double as a flag, displaying the same request prominently.  By the time you remove the skirt to wave the “Be Quiet” sign, of course, you’ll be buck naked, so no worries.  People tend to follow instructions from a naked woman by default (well, at least, I do).

According to the lingerie company, they decided on this concept because of the growing popularity of golf among women in Japan.  No word on whether naked golf, which is what this actually amounts to, is counted among that growth sector.  I sure hope it is.