Pre-Chewed Pencils Dare You To Gnaw At Them 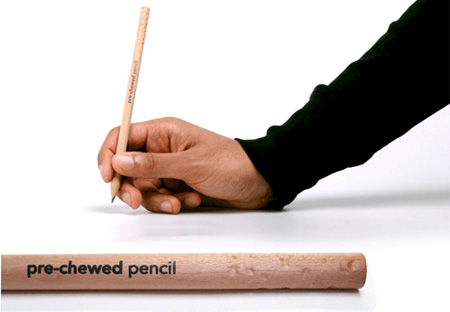 Like to chew on pencils?  It’s a bad habit that you really should put a stop to.  Wearing a muzzle over your mouth or putting mild poison on the pencil tips are both valid ways of curbing the behavior, but that can get somewhat crazy really fast.  Here’s something that’s a little less severe, but has a shot of actually being equally as effective: Pre-Chewed Pencils.

Yes, wooden writing instruments that someone chewed on well before you had it.  Absolutely gross.  That way, you wouldn’t even dare put your mouth anywhere near it.  At least, I don’t think you’d have the stomach to, do you?  Ewwww….really?

Each Pre-Chewed Pencil measures 17.5 mm long and 0.7 mm thick, with the rear end sporting numerous bite marks for decoration.  We doubt it’s actually been gnawed on by actual people (unless they employ an assembly line of chewers, which isn’t impossible), but it sure looks that way.  Whether genuine or not, the realistic marks will hopefully serve as deterrent to your mindless chewing.

Of course, you can also just buy regular pencils and pay the grossest person you know to snack on it.  I actually think that will be more effective since you have a very clear image of the dude who previously gnawed at the rear end.  Bringing your snout closer to the same tip should immediately bring their picture to mind and invoke vomiting before even opening your mouth.  Great success.

The Pre-Chewed Pencils are available in sets of four, priced at £1.49.