RoTrike Updates The Wheelchair To Run With Rowing Motions 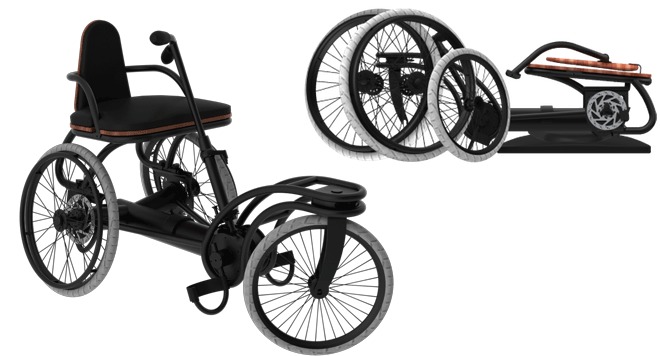 Mechanical wheelchairs are a great help for those who need ’em, but they are far from the most efficient mobility machines on the planet. Let’s face it, spinning the wheels with your hands doesn’t exactly an ergonomic design make. The RoTrike is a three-wheeled mobility chair that’s designed to operate with a bicycle’s efficiency, replacing the pedaling motions with corresponding rows.

How does it run better? Moving the traditional wheelchair places a lot of strain on the upper body, especially since it requires a lot of limb effort to both propel and turn. While the rowable invention requires arm movements too, it’s considerably less arduous: you simply push and pull a handlebar, the way you would an over-sized joystick.  The same handlebar works for controlling direction too, making for a simpler, less-taxing process.

The RoTrike’s handlebar lever can be lengthened or shortened (default is 24 inches), depending on your preferences. The longer it is, the better the pulling power it can deliver to the wheels (two 20-inch in the back and a 16-inch in front). It comes with an 8-speed internal geared hub, disk brakes, adjustable seating positions and sculpted arm rests, making chair-bound mobility as robust as riding a fully-rigged bicycle.

Another benefit is the ease by which it’s supposed to allow transfer from a bed to the chair. No hefting your own weight up over the wheels – simply swing one of the arm rests and slide either way, with plenty of leg clearance to boot. There’s also a push rim in the rear for maneuvering (reverse, spin and shunt) in confined spaces.

Don’t throw away the wheelchair yet, though. While definitely a better design, the RoTrike also considerably more expensive than the standard $200 wheelchair you can get from shelves. It’s currently on preorder, but the estimated final price is around $3,800.