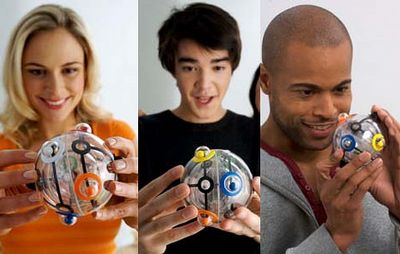 Tired of solving Rubik’s Cube over and over? Prepare yourself for a new challenge as the iconic puzzle gets a modern follow-up 35 years after it was first invented. Called the Rubik’s 360, it’s debuting in UK stores next week

Ditching the cubic form previously used in Hungarian professor Erno Rubik’s first two puzzles (Rubik’s Cube and Rubik’s Revenge), the 360 uses a transparent spherical design with six tiny domes on the shell. Inside the sphere are two smaller clear containers of a similar shape, with six colored balls right at the center.

The objective is to spin the 360 to get all six balls out from the smaller spheres and guide them to their corresponding outer domes. The player will then twist the two black dials on either end of the puzzle to trap them in place. As with most puzzle games, of course, the whole process should prove more difficult than it looks.

Now 64 years old, Erno Rubik didn’t develop the game on his own, but reportedly played a large part in its overall creation. Whether it proves as fun and as appealing as the original, which has sold over 350 million units since 1980, however, still remains to be seen.

Early forecasts for the Rubik’s 360 seem pretty positive, as UK stores are reporting it to be one of their most anticipated releases for the year. The game is currently listed on Amazon for $15.