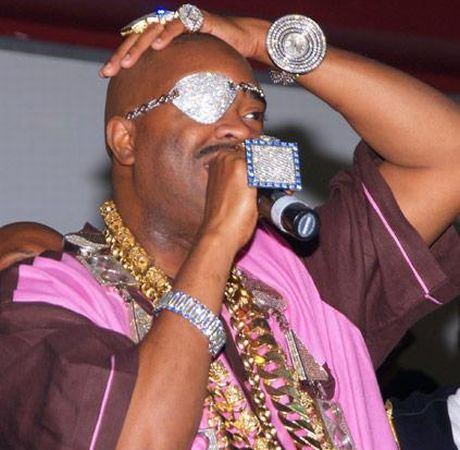 Why dress like an unbathed, out-of-luck pirate in your next costume party when you can suit up like a seafarer who just cashed out his entire booty? To make sure you look the part, best get your hands on a less-dingy eyepatch, preferably like the diamond-encrusted one Slick Rick used to own, which reportedly sold in a London auction for an estimated $25,000.

Yep, 25 grand for an iced-out, blind-eye gear. Of course, legendary rapper Ricky Martin Lloyd Walters (nee Slick Rick nee The Ruler) used to rock it, presumably while performing classic ditties such as “Children’s Story” and “La Di Da Di” (though probably not, since there are no stage pics of him wearing the multi-colored, studded ones that were sold, in particular).

The retardedly expensive eyepatch, which comes in a multi-colored camouflage style, was designed by the rapper’s wife back in 2005. Clad in a bevy of colorless, yellow, blue, pink and black diamonds, it was given to him as a gift on his 40th birthday.

For context, Slick Rick has worn an eyepatch as a regular part of his performance outfits. It covers his right eye, which has been blind due to injury (broken glass) since childhood (see, that’s why children shouldn’t play with glass shards). Esteemed auction house Philips de Pury handled the sale, along with tons of other music-related memorabilia, none of which appear to be half-as-cool as the bejeweled eye patch. Seriously. Another dress a singer wore at a concert? Blech. Some dude’s guitar? Next. An old diva’s wig?  Arrggh.