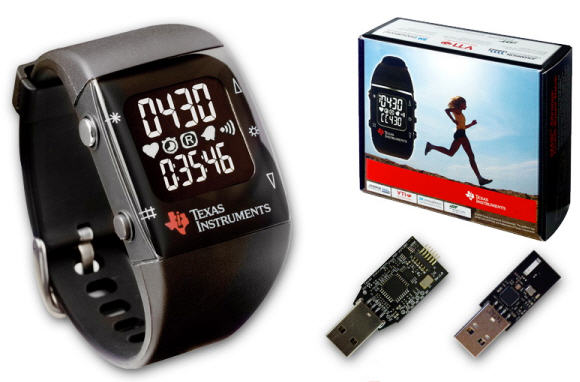 Need a gift for those perpetually-tinkering geeks in your life?  Keep them busy for cheap with Texas Instruments’ $49 eZ430-Chronos, a digital sports watch that houses a fully-capable wireless development platform they can program to their hearts’ content.

As the first contraption of its kind, the super-customizable gadget is specifically designed to facilitate building wireless networking applications, regardless of your specific expertise.  It’s about the geekiest thing we’ve seen  all year and might just be the very thing that resurrects the dying art of the digital watch.  Well…. maybe not, but you have to admit, wrapping a digital timepiece around your wrist never had such an attractive upside for the looooonnggggest time.

The eZ430-Chronos comes with a full development kit that puts TI’s CC430 microcontroller within your beck and call.  With powerful integration capabilities, low juicing requirements and full wireless support, that MCU is a heck of a versatile hardware that you can haul around anywhere you go.  Feature highlights of the watch/heart monitor/applications platform include a 96-segment LCD, onboard three-axis accelerometer, various sensors (altimeter, temperature and battery voltage), three different RF bands, internal dynamic storage and a USB-RF access point (to interface with computers).  It also comes with an eZ430 emulator for the PC, allowing you to write code even without the watch on hand.

Seriously, this gadget sounds like the coolest thing any programming nerd can get this year.  Screw all those shiny consumer electronics – this can potentially do a heck of a lot and it slots right on your arm.  Expect a serious community or two to form around this kit within the next few months.