The Flash Will USB With You…Always 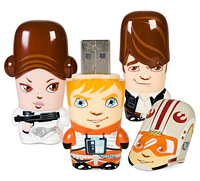 No matter what type of data you are attempting to transport, we promise it will be way more fun with these Star Wars flash drives known fondly as Mimobots.  These are collectibles, which means that they are toys that adults are allowed to play with, and come in 8 different character’s with a promise of more to come.

The drives are 1 gigabyte and Series 1 features Chewbacca, Darth Vadar, Storm Trooper and R2-D2 while Series 2 has Luke Skywalker – in his flight suit, Princess Leia – sadly not wearing the skimpy outfit that Jabba liked so much, Boba Fett, and Han Solo – in his characteristic vest and ill-fitting blaster belt.  The covers and drives come together to make the character, and we’re certain that you’ll have way more fun plugging in Boba or Luke whenever you need to transport data.

We think that you will you be sure of having a totally unique flash drive so that you’ll never get it mixed up with anyone else’s.   Not only that but the would-be data thief will think twice before swiping Vader from you.  Not only will you be able to easily recognize your flash drive – but Vadar just might ‘saber him or her into oblivion for you anyway.  In addition, the Mimobots come pre-loaded with some sweet Star Wars content, including wallpapers, avatars, videos and soundbytes, which you can transfer to your computer and enjoy.

We don’t have a problem with you taking the entire collection to work with you, on the pretense of needing to move a whole lot of data, and battle each other on your desk (hey we’ve done it ourselves) but we suggest you try to keep that particular activity to yourself.