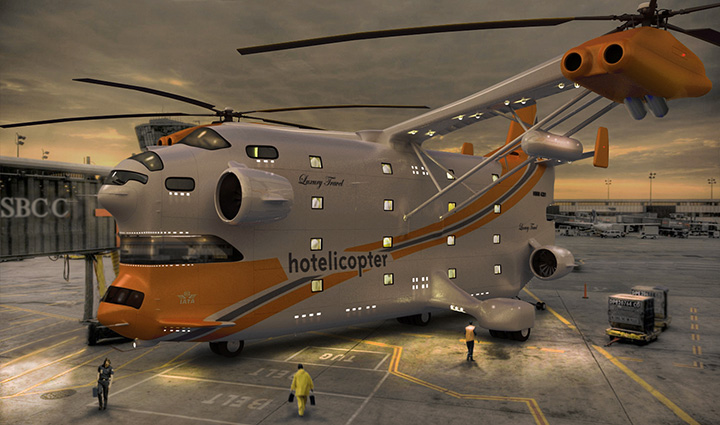 Those who like to travel in style will probably have to begin rethinking their transport arrangements once the Hotelicopter opens its doors to the public. More than being the largest helicopter ever made, it’s also the “world’s first flying hotel.”

Built out of a modified Soviet Mil V-12 helicopter, the unimaginatively-named Hotelicopter features 18 luxurious sound-proof rooms designed by Yotel, with all the amenities you can expect from a high-end lodging.  Guests will be treated to affluent accommodations, including large, comfortable beds, exquisite decorations, in-room mini-bars, private entertainment systems and various other creature comforts.

A large array of activities are available for guests, including  a fitness center, sauna, spa, live music, blackjack table, a yoga studio and even several gardens.  For corporate travelers, there’s also a business center and a concierge.  It’s really like a traditional luxury hotel, save for the fact that you’re flying up in the air!

As if the monstrous Mil helicopter wasn’t large enough, the Hotelicopter Company further extended it with an extra floor, along with four additional GEnx turbofan engines for a more powerful thrust.  All in all, the “flying hotel” measures 137 feet long and 45 feet high while being able to soar through the air at up to 255 km/h.

The Hotelicopter will be taking its inaugural flight in June 26, 2009.  Reservations are expected to open shortly before that.  Though the price for a night of stay aboard the flying hotel has not yet been disclosed, expect rates to be steep.

UPDATE : Unfortunately, this was a April Fools stunt by Hotelicoper. Not a bad one either.