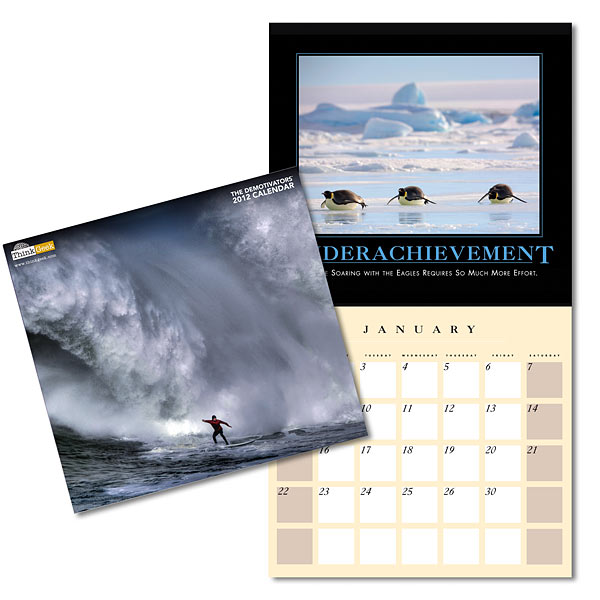 I know what you’re thinking.  Those demotivational posters are so old, they make “yo momma” jokes sound like they’re just two years too stale.  While these disheartening messages may not be in vogue, they’re still pretty entertaining.  Plus, the Despair, Inc. 2012 Thinkgeek Calendar comes custom-marked with important dates in geek history.

The calendar looks conventional enough, with the hilariously depressing poster on top and a one-month calendar below it.  Instead of celebrations you already know like Christmas and Thanksgiving marked on it, though, it comes with all the dates geeks may find of particular interest.  You know, stuff like Darwin Day (February 12), Star Wars Day (May 4) and W00tSt0ck (October 18).  That way, you don’t have to be the last to know it’s Talk Like a Pirate Day again or that next week is the Large Hadron Collider’s anniversary.

If you’ve ever geeked out on demotivational posters in the past, the designs in the  Despair, Inc. 2012 Custom Calendar should be familiar.  The ones included here are Acquisition, Adaptation, Change, Committees, Excuses, Indecision, Inflation, Mercy, Obstacles, Pride, Underachievement and Wisdom.  Of course, I’d have preferred if they put less-conventional photographs on there.  I mean, it’s 2012 — how about some kooky lomographic fanciness?  Or 3D?  Depressing slogans and headache-inducing 3D sound like a Brangelina connection to me.

So, how about it?  Are you hanging your company’s official calendar on your cubicle next year or would you rather raise your geek cred with Thinkgeek’s Despair, Inc. 2012 Custom Calendar?  It’s available now, priced at $15.99.