ACG Surf Racks Add Board Mounts On Your Bicycle, Makes For Instant Roofing Too 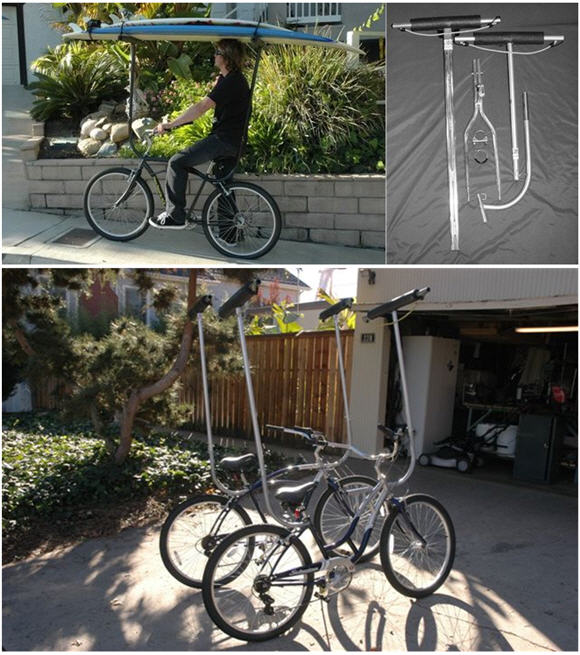 Bicycling to a surf spot sounds like a stupid idea.  Picturing it, in fact, hurts my head.  That is, of course, until you chance upon one of the products from ACG Surf Racks, which adds a mounting panel on your bicycle for surfboards of various shapes and sizes.

I’ve seen side-mounted board racks in the past, but ACG’s overhead compartments appear to be a much better idea.  Sure, that pipe hanging in front of you can be distracting, but you should be able to get over that after a while.

The racks consist of two padded T-bars, designed to bolt to the front and rear areas of your bicycle.  Elastic straps on the bars allow you to secure the board when you put it on top.  The height of the bars don’t appear to be adjustable, however, so if you’re Yao Ming – tough luck.

Having the boards hang overhead brings many benefits that other racking options don’t manage to deliver.  More specifically, you retain economy of space on the road, improve your visibility to motorists and get a veritable umbrella to shade you from the blistering heat.  In fact, you might just want to use it as a bicycle roofing system if you have no intentions of surfing – looks like it could work just fine.  If you’re more daring, you can throw in a narrow plank and use it for cargo, though I doubt that’s a good idea.

ACG Surf Rack lists a few shops around California and New Jersey where the racks can be bought.  No word on pricing, though.