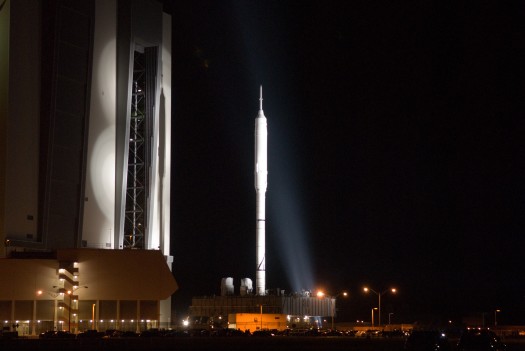 Welcome to the moon.  Again.  The new Ares I-X rocket, the first version of the vehicle that will bring man to the moon once more, is now geared for launch at Florida’s Kennedy Space Center.  And it’s quite the sight.

Situated at Launch Pad 39B, it’s the first rocket to sit on that pad in over 25 years, representing NASA’s initial major step in the Constellation Program, the new, post-shuttle era of space exploration.  Apart from returning to the moon, later efforts in the program are expected to take man beyond the lunar surface into Mars and the rest of our neighboring territories.

The Ares I-X will blast into the sky on October 27 at 8AM (weather permitting), as a first-phase gauge for the viability of the actual rocket that’s going to land on the moon (along with early proof for the hardware, models, facilities and ground operations that will be used) .  When the test rocket flies, it will reach 40 kilometers up in the air, sending critical information to NASA about its performance.

If all things (including subsequent tests) go as planned, the 100-meter tall Ares I will then take to space, carrying astronauts aboard the Orion crew exploration vehicle.  It will be the tallest and most powerful rocket to launch in space since the Saturn V.

The President of the United States will still need to give the go-ahead for this test flight (it’s currently under evaluation from the Augustine Commission), so things aren’t 100% certain.  It should be something to watch for come next Tuesday, though.