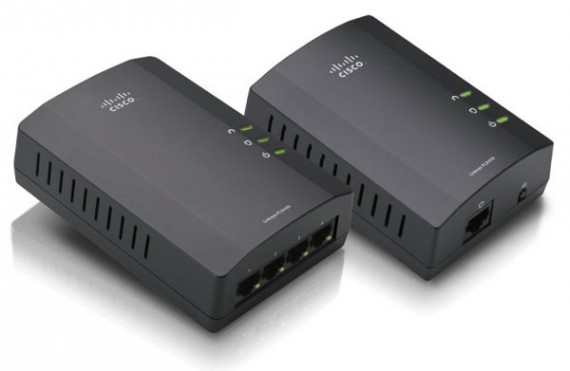 Cables are just annoying.  Sometime they might be necessary like when you need to check Facebook while hanging out in your basement dungeon that doesn’t seem to play friendly with your WiFi network.  The Cisco Linksys HomePlug AV looks to minimize the clutter by using your power lines to wire you down in that dark, dingy underground cell.

Three variants of the boxes are available, the PLEK400, the PLSK400 and the PLW400.  All three sets includes two boxes that you can stick up a wall outlet — one for hooking up with your router via Ethernet and another for plugging into that outlet on the basement (or whatever room your WiFi dead spot is).  When plugged in, it uses your built-in electric lines to transfer data at speeds of up to 200Mbps, saving you from the hassle of setting up a dozen or so feet of Ethernet cable neatly.

What’s the difference among the three?  The PLEK400’s output box has one Ethernet port and the PLSK400 has four (so you can wire up a PC, a game console, an internet TV and an auto-Twittering microwave oven), while the PLW400 throws in a WiFi chip to extend your network’s range.  According to Cisco, your home’s regular 120-volt electrical service won’t be disrupted by the data transfer, although there could be some appliances that can affect the data streaming (they don’t say which ones, though).