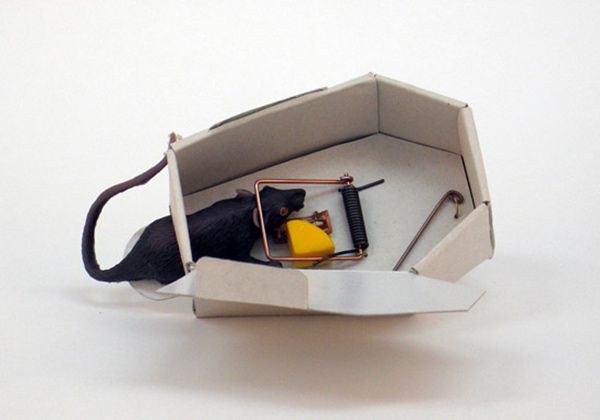 Even dirty rats deserve a proper coffin.  At least, that’s probably what designer Sarah Dery was thinking when she came up with her Coffin-Shaped Mousetrap.

Unlike new mousetrap designs that focus on efficiency (like the Victor Mousetrap we featured just a few days ago), the Coffin-Shaped Mousetrap has more to do with hiding the immobile vermin inside a specially-designed casket.  Once caught inside, you can simply dispose of the full casket with the rat trapped inside.  No need to look at it nor clean the mess up, as any spilled guts should stay within the closed box.

The coffin itself is made from cardboard (so construction is cheap), with a flip-top cover and a hole on one end.  The traps, which are shaped the same way as the casket and are also built out of cardboards, can be assembled separately and placed inside.  Simply close the lid once the trap is set and leave it out where the rats may find it. 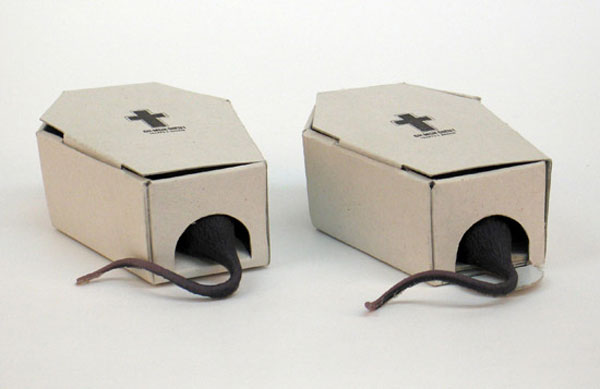 How do you know if the trap managed to catch a mouse?  You should see its tail dangling from the hole on the open end of the coffin.   If you’re so inclined, you can even give it a fitting burial in your backyard – just be wary, as other rats from the neighborhood might visit during the rites to pay their respects. Yikes!

Some folks claims the coffin design allows the animal to die with a little more dignity.  Seriously, though, getting ensnared while trying to score cheese on a stupid-looking mousetrap isn’t likely to endow any rat with respectability.  Just poison me, you dorks!

Gotta admit, this Coffin-Shaped Mousetrap has to be the cutest rat-catcher ever conceived.   Can you imagine nailing a dozen mice this way in time for putting up your Halloween display?  You’ll have the grossest, most awful-smelling decorations in the block!  You win.