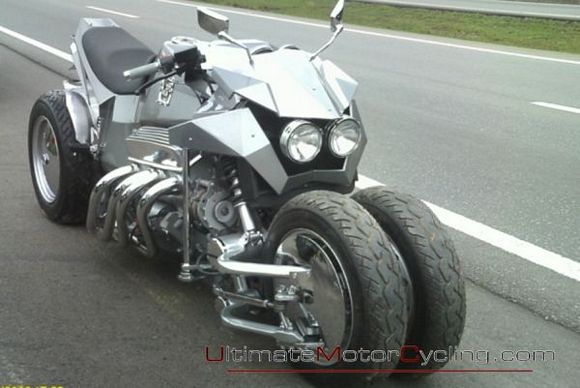 Four wheels on a motorcycle just sounds dorky. Lucky that image didn’t hold true for the Cosmos 4RWF, a powerful, four-wheeled muscle bike out of Brazil.

Technically a quadracycle, the unusually-styled crotch rocket features two wheels in front and two in the back, each one mounted independently. Each pair of 17-inch wheels, which are situated close together (compared to a typical quad’s wide placement), have been designed to work in unison, with the front setup connected to a hub steering system. On the demo video, it is shown strictly running on a straight line, which makes its ability to pivot side-to-side (like a regular bike) a bit suspect. 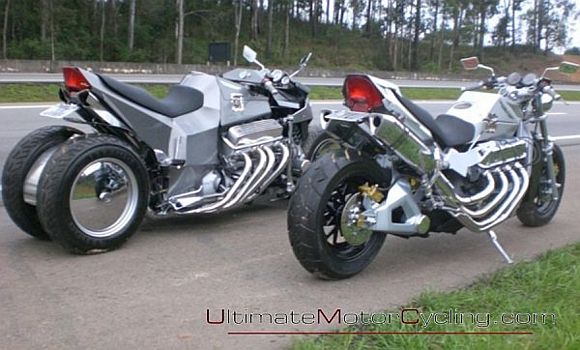 The 4RWF ditches the typical V-twin powertrain in favor of a full ZZ4 Crate Engine, which packs a claimed power output of 350 hp. Cosmos mated the V8 engine to a three-speed transmission, with reverse gear capability. It sports a mono-block chassis, with an overall length of 2.60 meters and a frame measuring 0.9 meters.

According to creator Amadeu Ferreira Junior, he’s looking to serve a subset of motorcycle enthusiasts who are looking for a radically different ride. A four-wheeled behemoth sure fits that bill, especially one packing as much power as a fuel-injected V8. For those unconvinced of the virtues of a quad masquerading as a bike, a more conventional two-wheeled version called Cosmos 2RWF is also in the works, which features essentially the same specs, save for the wheel configuration.

Both the Cosmos 4RWF and 2RWF models will be limited-edition machines. Each production unit will be made-to-order, with exact dimensions to be customized to the rider’s physical characteristics. Pricing is projected at $93,200 for the 4RWF and at $82,100 for the 2RWF.