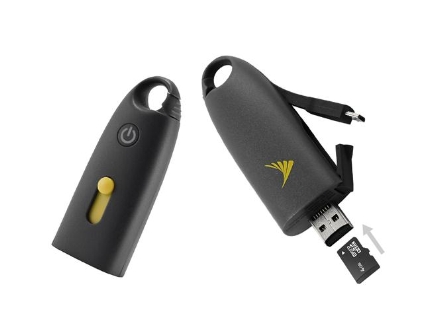 Want to have emergency cellphone power when you’re on the road?  I can teach you my voodoo power generation chant, but that would take too long, so I’d just point you to this: the Sprint Battery Boost.

Clad as a small plastic key fob, it inconspicuously hides a 600-mAh lithium ion battery inside, which will allow you to give any micro-USB-charged gadget a quick hit for emergency needs.  According to the retail page, it can dispense juice good enough for up to one hour of cellphone talk time – a godsend when you find yourself out of battery and needing to make a call without an outlet in sight.

The Sprint Battery Boost has a flip-out micro-USB plug that you can stick into a phone, MP3 player or whatever energy-sapped handheld devices you’re looking to bring to life.  To top up the battery before you go on the road, just pop out the retractable USB plug and stick it into your computer (or any USB charger’s) port.   It also doubles as a  microSD card adapter – just stick the card in and use it like a regular pen drive when you’re at home or in the office.

It features a carabiner-style clip for hooking onto bigger items, so you don’t lose it like the dozen or so thumb drives over the years that have ended up misplaced or falling out of your pocket.  The power button on the outside doubles as a battery status indicator too, allowing you to quickly see when the device is fully charged.

Because it’s so small, you can probably afford to carry several Sprint Battery Boosts without taking so much space for your other on-the-go gadgets.  It’s reasonably-priced too at $30 each.