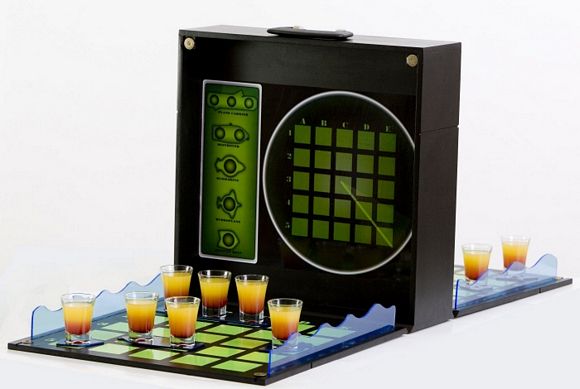 Corrupting fairly innocent childhood games into a way to get shit-faced drunk is a wonderful pastime that we’ve probably all been guilty of at one time or another. The Enigma Battleship Drinking Game, however, takes it to new heights, touting an entire game board, complete with colorful lights and squares sized just right for a shot glass.

Currently just a design concept instead of an actual product we can all destroy our brain cells to, the Enigma plays much like a regular Battleship game. Instead of “ships”, however, you control an army of loaded shot glasses. Each one of your fleet that gets blasted by the guy on the other side will need to find its way down your throat.

The game’s Brazilian creator Mauricio (Tony) Harion didn’t make an alternate set of rules for this version of the classic turn-based strategy, so I guess the winner will either be the guy who wipes out his opponent’s army or is still not passed out before the game is over.   Of course, the real winner in this adult Battleship head-to-head is a little confusing. Since the point of drinking is to get drunk, doesn’t it make sense that the guy who imbibes himself silly is the eventual kingpin?

One thing’s for sure: blending naval war strategy and alcohol consumption is a brilliant idea that never looked so good as it does with the Enigma Battleship Drinking Game. Game companies, get this ready for Christmas!