Enjoy The Deep Seas With A Pedal-Powered Submarine 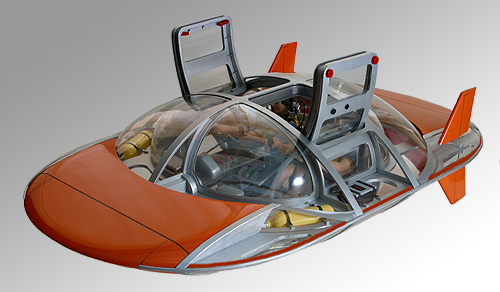 Owning a submarine, for the most part, is well beyond most people’s means.  Both the cost of acquisition, maintenance and actual operation of one require massive amounts of resources.  As such, the experience of enjoying the deep seas while comfortably inside a submersible device is an encounter few of us ever get the privilege of.

That might all change if the new small underwater vehicle from Marine Innovation Technologies (MIT), a Russian company, manages to make it to production.  Instead of a complex, engine-powered submarine, they’re working on a two-seater vessel that moves via pedaling, no different from a bicycle.  As such, it requires little training to operate.

Of course, regular bike paddling isn’t going to be enough to move you across the water.  Submarines require propulsions of between 3 to 5 kW to achieve underwater speeds of up to 3 knots.  An average person riding a bike, on the other hand, only generates up to 0.4 kW of thrust.

According to MIT, their undersea ride combines an innovative design with the use of rotor-jet propellers that “direct an air jet through a flat slot, in a tangential direction, onto the surface of the vehicle, where it adheres and generates thrust.”  Simply put, the effect allows a single person paddling inside the craft to propel it at necessary speeds for at least two to four hours.

Measuring 11.5 x 4 x 6.5 feet and weighing under two tons, the vehicle should be small enough to be transported via a car trailer.  It can be driven both on the water surface (up to 5 knots) and underwater (between 2 to 3 knots) at depths of up to 30 meters.  Drivers get some degree of maneuverability as it can go forwards, backwards, up, down as well as hover and rotate on its vertical axis.  Majority of the body will be transparent, allowing for plenty of viewing angles when you’re riding inside.

MIT is initially gearing the vehicle for the tourism industry, with plans for mass market once the concept has proven itself.  Price is still unsure, although the company is estimating total costs to run between $30,000 to $70,000 (depending on customization options), with little maintenance necessary.