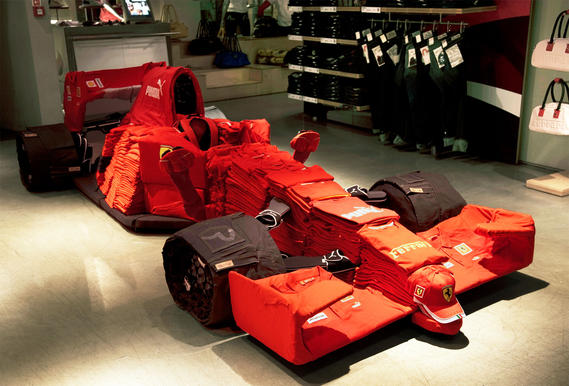 Want your very own F1 replica, but can’t build a dog house if your life depended on it? If you have a few thousand articles of clothing to spare, you just might be able to. The Puma Store in London’s Carnaby Street put one together using nothing but the unsold garments and accessories in their stock. Geez, guys, do you sell anything?

It’s not as painstakingly detailed as the matchstick F1 replica (then again, few people are that insane), but their full-size reproduction of Kimi Raikkonen’s 200mph Formula One ride looks like serious eye candy. Even better, they put it together with no laser cutters, hammers or even glue in sight.

Using 1,500 T-shirts, 88 pairs of jeans, 20 belts, 26 pairs of shoes and several baseball caps, combined with some creative folding work, the design team managed to construct a full size build of the iconic racer. Makes you want to raid the thrift store (or the prison garment supplier, whichever one you have access to) for a thousand cheap orange shirts, no?

Advertising agency GBH is credited with the creation, which, reportedly, took five hours of folding and stacking to finish. I’d guess they put in plenty of hours (probably a lot more) for the planning, as well, because that thing looks sick.

Want to build one like it? Check out the video below, which shows the design team putting the Ferrari Grand Prix replica together. It’s no step by step instruction, but you should be able to pick up some ideas.