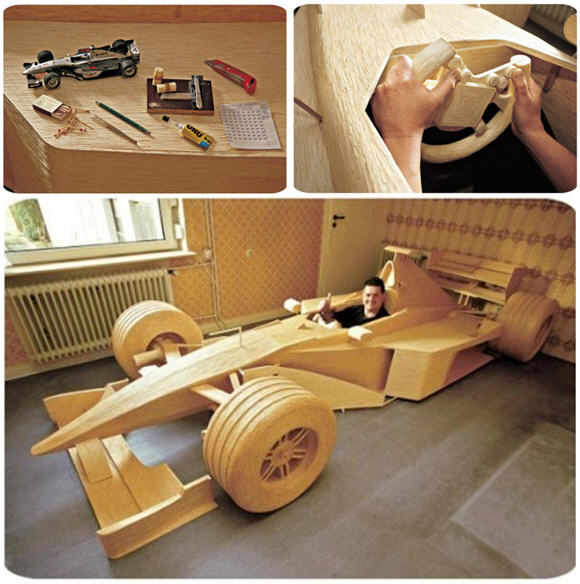 Want to know how long it takes to build a wooden full-scale F1 car replica?  In the case of the model above, it took over half a decade of daily toil. Sounds awfully long?  It probably does, but that’s because the entire thing consists of close to one million matchsticks glued together.

That’s right, the 1:1 scale replica of a McLaren 4/14 F1 car consists of 956,000 individual matchsticks, painstakingly stuck together by 1,686 tubes of glue.  Because of the enormous amount of those cheap materials that went into its production, the matchstick reproduction cost around $8,725 to build.  Aren’t you glad you never took up matchstick model construction as a hobby when you were a child?

Created by Michael Arndt from Germany, the amazing feat was produced over the course of six long years.  That means while you were raising a child, completing high school or jumping from one job to another, Michael was hunched over his worktable, sticking matchsticks next to each other with an adhesive.  Aaah…life can be so fleeting.

The wonder doesn’t even end there.  Michael designed the model so it can be taken apart and assembled easily, breaking down into 45 different parts for better portability during transport to various exhibits and conventions.  As you can see, it’s incredibly detailed and accurate.  If you paint over it and slap some stickers, you might just trick someone into thinking it’s the real thing.