This Green Lantern Ring Projects A Signal To Alert The Corps 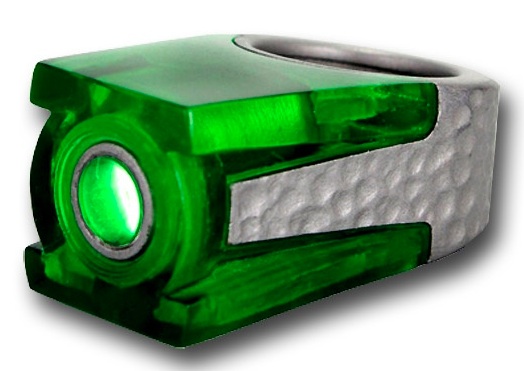 So, the Green Lantern live action movie’s coming up soon.  If you’re planning to costume up to attend the first-day showing, might we recommend this as part of your ensemble: the Green Lantern Projection Ring.

Not only does it make your look like an absolute superhero, the accessory also makes it easy to find you in a crowded theater filled with fellow dorks dressed up as members of the Green Lantern Corps.  Armed with a built-in projector, it can throw the Green Lantern symbol up a wall so your friends (who decided to come as Batman — stupid, I know) can quickly seek you out.  Just hope to God none of the other people in the room are wearing the same thing and think it’s a good idea to turn on their rings the exact same time you do.

The Green Lantern Projection Ring measures two inches from the top of the ring to the bottom of the band and an inch wide.  Construction is entirely plastic and hard resin, so there’s nothing classy about it — you’re an adult person who dresses like a superhero, though, so we doubt that’s a problem.

The projector is switched on by a control button at the bottom of the band, which lets you sneakily activate it with the quick flick of a thumb.  Once turned on, it will throw the Green Lantern image over any surface at a distance of up to  50 feet.

You can get the Green Lantern Projection Ring from SuperHeroStuff, priced at $11.99.  It’s one-size fits all, though, so  take that into consideration before buying.