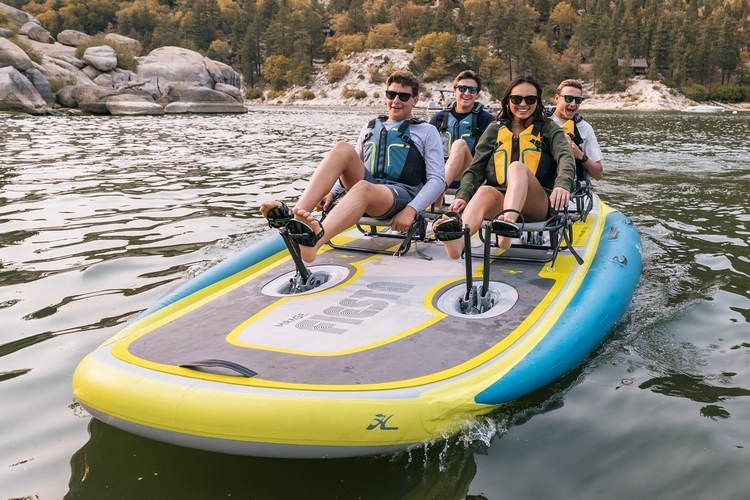 Riding a kayak is fun. Riding a tandem kayak with a friend… even more fun. The Hobie Mirage iTrek Fiesta takes the fun to the next level by letting you ride as a quartet, allowing you to have a full riding party all sitting on one kayak.

That’s right, it’s a four-person kayak, so you can take to the waters as a full crew, ensuring you’ll have a better chance of fighting back if you ever come across a monstrous lake creature in search of its first meal after 100 years of hibernation. Well… you’ll probably all be eaten, but you’ll, at least, take a united last stand. There’s some merit in that. 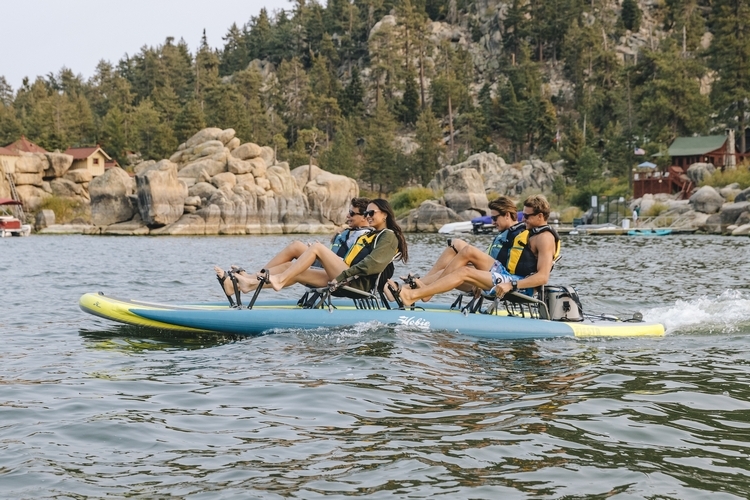 The Hobie Mirage iTrek Fiesta is an inflatable kayak that, honestly, looks more like a giant paddleboard with chairs, a design that isn’t really uncommon these days. Those seats are arranged in a 2 x 2 layout (front and rear), so it’s much wider than your typical kayak, likely making it unsuitable for exploring narrow caves and similar structures. Instead of using paddles to propel yourself in the water, it comes with the outfit’s MirageDrive system that has you pedaling to get the watercraft moving. To the unfamiliar, this system is meant to make kayaking more approachable, as it makes moving on the water as intuitive as riding a bike, all while relying on your much stronger and more durable leg muscles, so you can keep it moving for longer.

Hobie’s MirageDrive, by the way, uses the outfit’s Glide Technology, which uses roller bearings at key friction points to make the pedaling action smoother and more efficient. It also uses the outfit’s “kick-up fins,” which use a square-top design to maximize the surface area while maintaining a foot of mast length. They also automatically retract on impact, ensuring you can keep gliding on water even when you encounter logs, kelp, shallows, and other obstacles under the water. An optional “turbo” version of that fin is also available, giving users even more surface area and mast length to give you more thrust with every stroke. 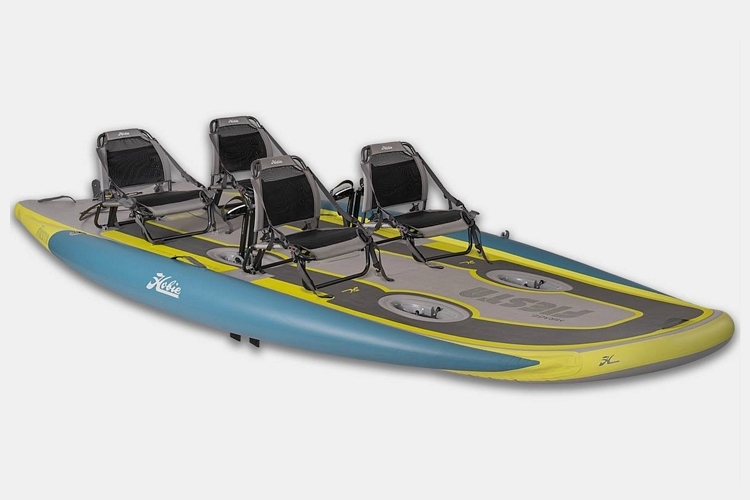 The Hobie Mirage iTrek Fiesta has a 400-denier triple-chamber construction that, the outfit claims, delivers the same stability and rigidity as a solid boat. That means, you get the same rugged performance while you’re in the water, all while being a whole lot easier to pack down and transport once you’re out. Each kayak uses two MirageDrive systems, by the way, so two people can send the boat moving in tandem, with the option to add two more, so all four of you can donate your leg muscles to propelling the boat even faster. 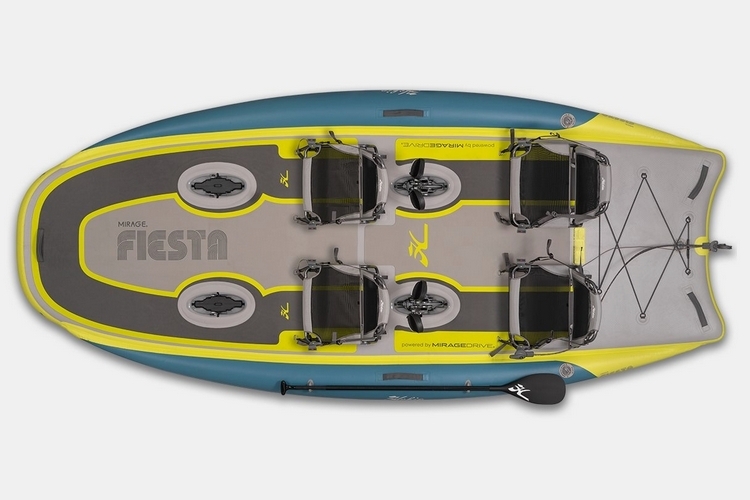 Not a fan of the car-style seating? Not a problem, as it allows you to face the chairs towards each other for real group bonding in the water. Just make sure someone is looking at the path ahead, so you don’t hit a rock or something. Other features include a 1,000-pound capacity, a total weight of just 105 pounds, iTrek seats, rear cargo area with built-in tie-downs, carry handles both front and rear, and even an included paddle with a holder on the side, just in case you need it.

The Hobie Mirage iTrek Fiesta comes out in March, priced at $4,899.