Knokkers Gets You “Bowling” On A Giant Pool Table 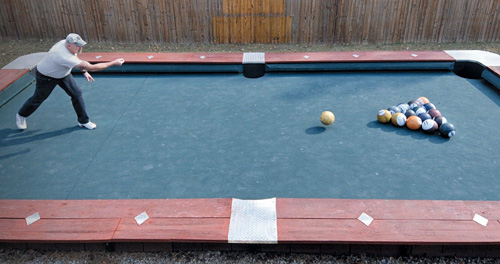 I’ve been playing pool since I was a gangly teen with a severe case of acne.  For some reason, though, I never progressed past being another “drunk dude pissing money down the hall.”  Maybe, just maybe, I can finally channel my inner Earl the Pearl with this: the Knokkers.

The brainchild of Steve Wienecke, the new game is just like regular pool.  You can play Straight, 8-Ball, 9-Ball or whatever other variation of making balls drop into any of six holes you can come up with.  Except you might actually have a chance of beating “Bata” Reyes in it.

Knokkers is played in a felt-covered “table” measuring a massive 15 x 30 feet.  Yes, you can totally be clumsy and fall over, so they only raised the playing surface a feet and a half off the ground — it’s safe.   You use what appears to be duckpin-sized balls; rather than poking at the cue ball with a stick, though, you release it using bowling strokes, sliding it over the next numbered ball as you sweep the table for a victorious set.

Unlike bowling, you don’t get any striding room.  Instead, you’re supposed to plant your feet where the cue ball stalls and throw it back without leaving the floor.  We’re not sure how fun it actually is, but given that it’s got balls, holes and a giant pool table, we’re inclined to give it the benefit of the doubt.

According to the website, Knokkers will launch in several Southern California bars around the middle of 2010.  Likely, the debut depends upon a portable version currently under development that will allow them to set up a playing area without having to install any permanent fixtures.