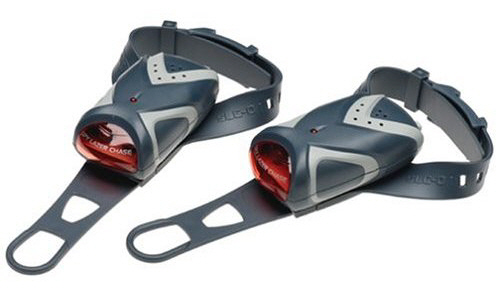 I’ve always been more inclined towards Airsoft than Laser Tag – there’s just something more compelling about shooting real projectiles instead of invisible beams.  Playing Laser Tag using gloves from Spy Lazer Chase, however, just might make me change my mind.

It’s one thing to shoot laser guns like sci-fi adversaries.  It’s a whole other to fire them from your arm, the way space-age portagonists are supposed to do.  Futuristic weapons, after all, should be wearable and this thing fits the bill nicely.

Worn on your wrist, these laser gloves fire the same invisible beam as laser pistols every time you clench your fist, complete with dazzling sound effects.    It can tag opponents up to 45 meters, creating an ensuing laser blast explosion as soon as you damage a target.  Life force meter allows competitors up to five lives.

While I’m not certain how accurate these “weapons” perform compared to the popularly-used heavy-duty equipment with guns and sensors on your chest, it’s still a cool alternative.  I have a feeling they’ll fail in comparison, though, since they’re more likely geared for younger kids than competitive play.  However, the joys of “punching” a laser blast through your opponent should more than make up for it.

The laser gloves from Spy Lazer Chase are currently available from Amazon for around $16.