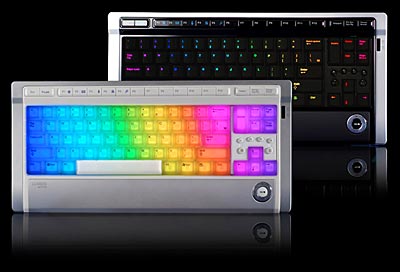 Think keyboards should be more than drab, utilitarian peripherals for your computer?  Here’s the keyboard for you: the Luxeed U7.

Possibly the most ridiculous illuminated keyboard ever made, it hides a whopping 430 LEDs under the keys.  That means, you not only get to light up each key with a different color, you get to make it do fancy effects and light shows all for your in-cubicle amusement.

The Luxeed U7 measures 15 x 7.5 x 1 inches, sporting 87 regular keys and 11 special keys.  When used with Windows computers, it can toggle between Plug & Play (P&P) and Software Controlled (SWC) modes.  The former allows you to set the lighting right on the keyboard itself (no drivers necessary), while the latter lets it interact with software on the fly (such as the MuSkin pack, which makes the LEDs respond to the rhythm of the music playing on the PC, among other customizations).

For Mac and Linux machines, you’re limited to P&P, which isn’t too shabby itself.  Features include four lighting theme presets and four special effects (spark, rainbow, animation and slideshow).  Do note that the P&P feature is, pretty much, the same one available on the older Luxeed U5 model (the SWC mode is the innovation on the U7), so this only makes sense if you have a Windows machine as your primary computer.

We know what you’re thinking: “Isn’t the Optimus Maximus more awesome than this?”  Probably.  But that thing costs in the thousands.  The Luxeed U7, however, lets you have all that for an affordable-sounding $129.99.  You can get it now in white or black colors.