Do you use Twitter in the office?  It’s definitely shaping-up to be the new workplace distraction, much the same way Facebook has been for the last couple of years.  As with any other time-killers, bosses aren’t taking too kindly to it.  Who the hell wants their employees spending office hours following celebrity tweets from Ashton Kutcher and Demi Moore?

Recognizing the growing need to use Twitter discreetly in the workplace, British developer Elliot Kember created the Spreadtweet.  On first glance, it looks just like any boring Excel spreadsheet.  Look closely, however, and you’ll notice it’s not.  Instead, it’s a full-featured Twitter client that’s designed to make you appear to be poring over reports, all while reading the latest 140-character messages from whoever you’re following.

Beyond just being a way to get the boss off your back, though, it’s actually a great Twitter client.  It allows you to send tweets, reply to tweets and even send direct messages right from the same screen.  Interface is clean and very intuitive, with each tweet appearing as one row on the spreadsheet, allowing you to read more of them in one glance than other popular applications.

Spreadtweet comes in three flavors, mimicking Excel 2003, Excel 2007 and Excel OSX.   Built off Adobe AIR, all versions can work on any Mac or PC with the AIR runtime running in the background.  It features all buttons and controls available on real Excel spreadsheets, although they’re purely for show and are non-functional.  As with other Twitter clients, you’ll need to login to your Twitter account using it. 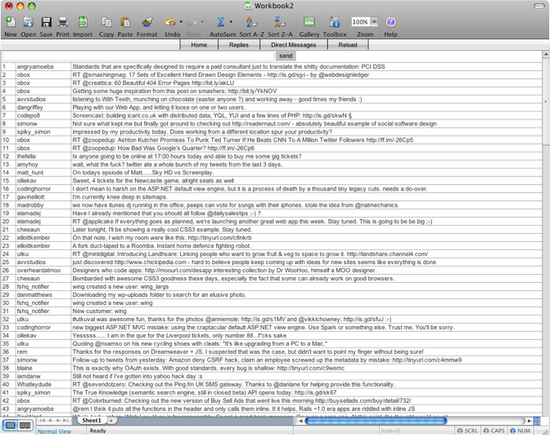