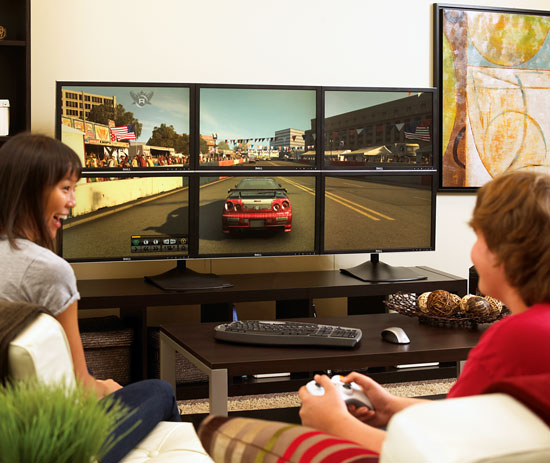 Six monitors, one display.  You’ve probably seen it in movies, where some hacker dude video chats with some other clown on a large display using multiple LCD panels.  I’ve seen it in concerts, too, and always wondered how I can do the same setup at home.

When AMD releases their new ATI Radeon graphics cards with DirectX 11 compatibility, it should be as easy as hooking every LCD panel to your computer.  That’s right, their new line of GPUs will offer a feature called Eyefinity, which lets you hook up six monitors in a 3 x 2 grid for a single, unified display. 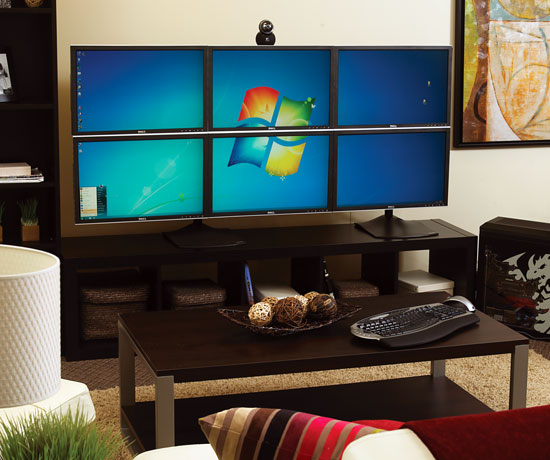 Eyefinity achieves the capability using a combination of the new ATI Radeon cards and AMD’s SLS software.  It appears to support all types of display connections, although you’re required to have at least one monitor connected via DisplayPort.  Naturally, you can also use the monitors as individual desktops, but that doesn’t sound like any fun now, does it?

Sure, the bezels between the screens are annoying.  That’s why several companies are lining up new LCD panels with ultra-thin outer rims.  You can always just opt for one large LCD (say, 50 inches), as well, if you want a display that can swallow your face.  However, that will likely limit you to a 1080p resolution over HDMI.  Six monitors arranged as a single large surface like this, however, nets you a ridiculously detailed 7,680 x 3,200 pixels.

Believe it or not, your 1080p LCD just might end up being passé soon.