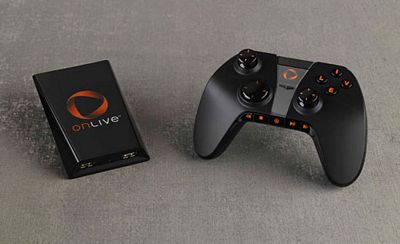 Are the days of the console and dedicated gaming hardware numbered?

That’s what OnLive purports to make happen with their streaming service, which will run your games on a server farm, render the output as video streams and send it to your home OnLive receiver through the internet.  All you need is an OnLive set-top box that you can connect to a television set or a software client running on your budget PC to receive the transmissions.

If this thing proves true to form, you can now say goodbye to hardware upgrades for the sake of playing Crysis and whatever other graphic-intensive title ships next.  OnLive claims it only requires a 5mbps connection to get you continuous 720p HD streams and 1.5mbps for standard definition outputs.

While the promise sounds too good to be true, large publishers are already jumping on board.  The company currently boasts EA, THQ, Ubisoft, and Epic among the companies ready to offer their titles in OnLive’s subscription-based gaming distribution model.

As of now, though, pundits are posing more questions than praises.  Realistically, it’s hard to imagine this thing holding up to thousands of simultaneous users, rendering all those videos while registering mouse movement and other controls in real time for fast-paced games.

Who knows, though?  I never even imagined I could watch a near-limitless amount of idiots doing unfunny things (read: YouTube) on a palm-sized device 6 years ago.  We’ll know soon enough when OnLive opens for beta in the summer.