Raytheon’s Wireless Combat Simulator Jolts You When You Get Hit, Blinds You With Flash Bangs 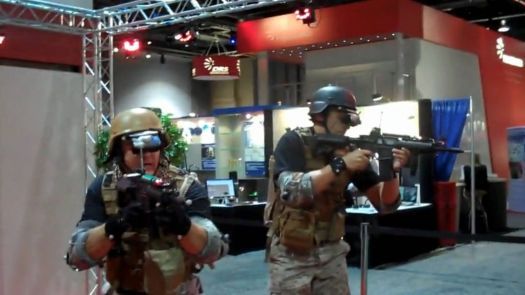 Sure, FPS games make for great combat simulations.  That is, if all you want to practice is shooting and running for cover.  Raytheon’s new combat simulation takes it to the next level, adding the muscle-numbing effects of getting shot and being blinded by a flash bang into the mix.

Developed in conjunction with Oscar-winning 3D simulation company Motion Reality, the new computerized battlefield training can drill up to twelve soldiers at a time.  At the moment, the available software consists of roughly 100 training modules, geared strictly towards IED-clearing scenarios and small unit combat, although it can be expanded if results from the planned sessions prove positive.

Each participant gets a pair of VR googles and a vest, both of which interface wirelessly with the simulation system.  You read that right – it’s free from cables, allowing you to crawl, jump, climb and roam around wherever you may be playing.  When you get hit, the vest provides a jolt that accurately times the virtual bullet.  According to Raytheon, it won’t knock you out like a TASER gun, but should render the damaged area temporarily numb.

Being a fully interactive simulation, the virtual enemies respond to both sound and the sight of enemy rifles.  They duck, run, hide and fight back tactically, the same way any good AI would.  An AI commander that consists of a real person can also bark instructions at the enemy soldiers with voice commands, adding an extra level of difficulty to the simulation.

Of course, the real question is, when will the FPS crowd get to enjoy this magnificence?  Sadly, the answer is in the less-than-affirmative, with the system marketed strictly to defense organizations at the moment.  It’s currently on display at the Association of the US Army (AUSA) annual conference in Washington, DC.