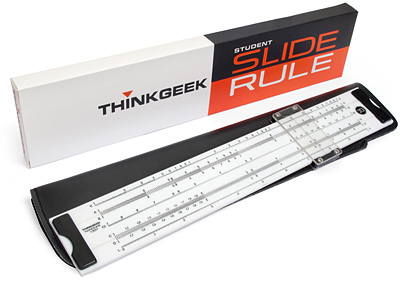 Back in the 60s, nobody had personal computers.  Heck, nobody even had calculators (those didn’t come out till 1974).  Instead, the math nerds of the day performed their advanced calculations on a slide rule, the mechanical analog home computer of yesteryears.

If you’ve ever fancied trying one out for your own multiplication, division and basic scientific computation needs, the ThinkGeek Slide Rule should let you enjoy the experience.  That’s right, some dudes actually thought it was a good idea to recreate a technology that nobody has really used since the 70s.  Why don’t you build a Pascal computer while you’re at it, guys?

ThinkGeek’s Slide Rule is a faithful recreation of the classic ones used extensively by students and professionals during the 50s and 60s.  They also claim it is the only slide rule currently in production (which isn’t really a shocker).  Measuring 12.5 inches, it can perform basic multiplication and division, along with a number of scientific functions, including squares, square root, cubes, cube root, proportion, logarithms, sine, cosine, tangent and cotangent. 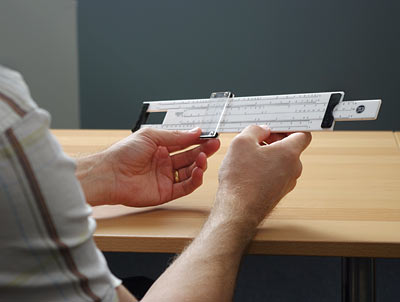 I have to admit, I’m a little interested in getting one.  I’ve never used a slide rule before either, so I’d probably have fun learning how it works for a day.  Then, I’d get tired of making life more difficult than it has to be, at which point I’ll decide whether to wrap it in a goldfish trashbag or use it to swat flies in the backyard, instead.

Each individually hand-tooled and printed ThinkGeek Slide Rule is available for $29.99.  The site also has links to instructions and informational articles about using the device.