Tron Skatecycle: Your Lightcycle Is Now A Skateboard 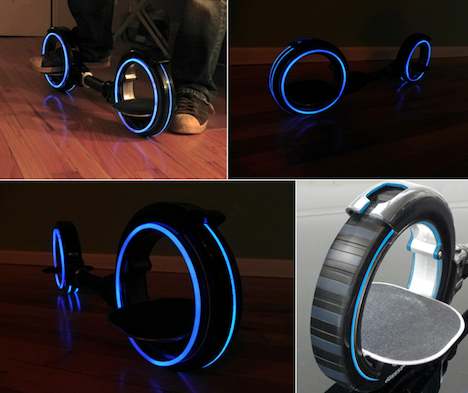 The Freerider Skatecycle is an awesome product all on its own.  Combine that with what’s likely to be one of the biggest movies of the year and you get something epic: the Tron Skatecycle.

Created by Alon Karpman of Brooklyn Workshop, the custom-built skateboard is actually a Freerider, modded to sport the colors and lights of the movie’s signature Lightcycles.    The results are impressive, to say the least — enough to give modding-incapable Tron nerds some serious geek-envy.

If Alon was looking for a way to drum up interest in the Freerider (which is slated to ship end of January), this Tron-inspired mod definitely does it good.  The Tron Skatecycle is actually built in much the same way as his usual hubless two-wheeled self-propelling board — it has a solid aluminum frame and composite body parts, with 32 x 6.5 x 8.5-inch dimensions.  Of course, it sets itself apart by sporting a darker finish (to hide itself in the dark) and circles of light to get a similar look to the futuristic crotch rockets they ride in the movie.

With costumes, toys and full-sized motorcycles bearing the likeness of both the characters and the vehicles in the movie having come out already, we imagine the first-day screening of Tron Legacy to be downright nuts, with people likely donning their best merchandise on display.  That’s why I’m staying home on the 17th and waiting till next week to see it.    Yeah, I’m that guy who doesn’t enjoy your shameless geekery. Does that actually make a jealous closet geek?

Watch the video below to see the Tron Skatecycle in action.