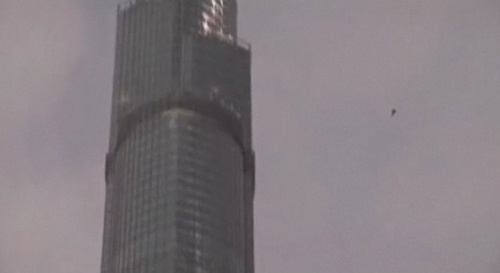 The Burj Khalifa (formerly known as the Burj Dubai) officially took the title of the “world’s tallest building” last week.  Not long after that, two base jumpers trekked to the top of the extra-tall edifice to be the first fellows to fall from it.  Nice.

Setting their own world record for the highest base jump are Nasir Al Niyadi and Omar Al Hegelan, who both leaped off the structure to parachute down on the streets of Dubai.  See that dot on the photo?  It’s one of them.  That’s an entire 2,716 feet down the side of the Burj, with both men taking their sweet time free falling before firing off their chutes to retard the gnarly, half-mile drop.

The duo jumped separately, one after the other.  Of course, it would have been more entertaining if Nasir and Omar hit the air at the same time, but that would probably be teetering too far on the edge of danger – even for a pair of extreme athletes.

Both guys wore cameras on their helmets for a full action view of their record-setting falls.  The jump had the thumps-up of the Burj, so they didn’t have to do any crazy running from building security to make their way up the building.  I have a feeling many, many folks will try the same without the proper consent, though.  The Guardian has a video of the entire proceeding (link below).