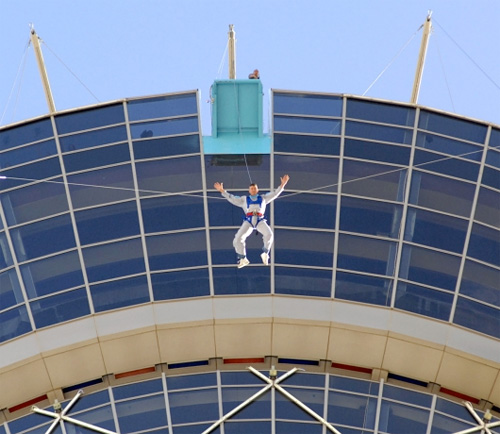 The Stratosphere has been the tallest structure in the Las Vegas skyline since 1996, standing a whopping 1,149 feet. Now, you can jump from it with SkyJump, which offers a controlled free fall down the 100-story hotel.

Certified by the Guinness World Records as the highest “ride” of its kind, the experience is quite simple: you get a platform to jump form, cables to hold you through the plunge and a target 829 feet below. Like the three other amusement rides on top of the Stratosphere, it should be completely safe, but is likely to deliver a pants-pissing thrill like no other.

Ready to serve the Sin City’s daredevils, the SkyJump is a commercial decelerated descent that sees you jump somewhere near the tower’s observation deck (108th floor) down to a blue and black target at an estimated 40mph. Jumpers get some safety lessons, which hopefully includes how not to wet your pants, before being strapped to the patented “descender machine.” Once you hit the mark at 829 feet, you will then be slowly brought down the ground. 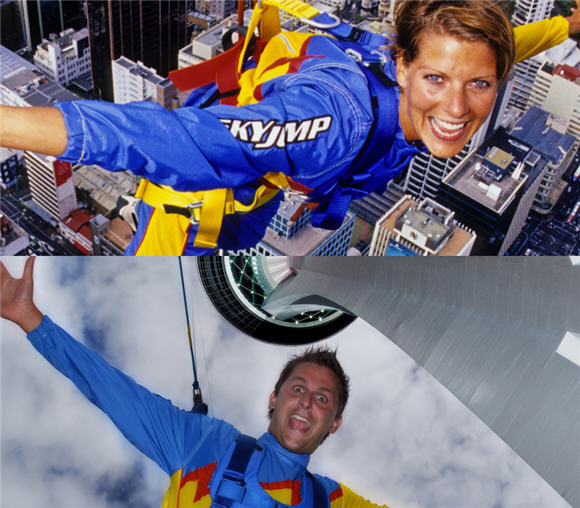 The whole experience (including the lessons) takes around 30 minutes, which severely limits the number of people who can jump everyday. It’s only open from 12pm to 7pm too, so better book a slot if you want to try jumping to your death without actually dying. Basic price is $99 per jump. If you pay extra, they’ll record your jump on DVD and take a photo of you from the launch, which should make for nice souvenirs of that time you peed your pants in Vegas.

The SkyJump is open to the public starting today.