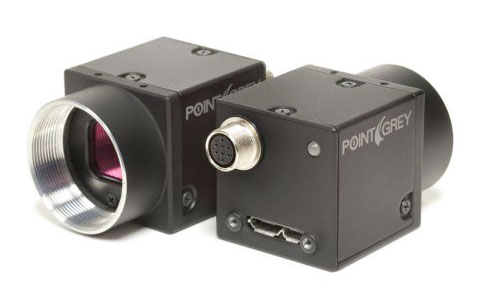 We normally associate 4K resolution videos with those large professional cameras that we see big-time filmmakers using in their behind-the-scenes videos.  Turns out the technology isn’t confined to humongous rigs, as the new Flea3 demonstrates so emphatically.

Made by Point Grey, it’s the world’s smallest 4K camera, measuring in at just 29 x 29 x 30 mm.  Yep, that’s not a misprint.  It really is the size of a generous ice cube and it’s downright impressive.

The Point Grey Flea3 pipes those 4,096 x 2,160 resolution images (at 21 FPS) through a USB 3.0 port, which you can hook up to any device with a similar interface.  While we doubt the video quality (immense resolution notwithstanding) will be anywhere near as sublime as Red Epic captures, it’s still quite the fascinating piece of portable gadgetry.  Because of its size and high-res videos, the camera is being primed for business-centric uses, such as optical inspections and mobile broadcasting.

The bad news: people will easily mistake this 4K2K camera for a cheap toy (it’s only slightly bigger than those Chobi CAM ONEs, after all), so try to keep it in a shirt pocket or jacket pocket the whole time. The Point Grey Flea3 (model FL3-U3-88S2C-C for the 8.8 megapixel version) is available now, priced at a reasonable $945.