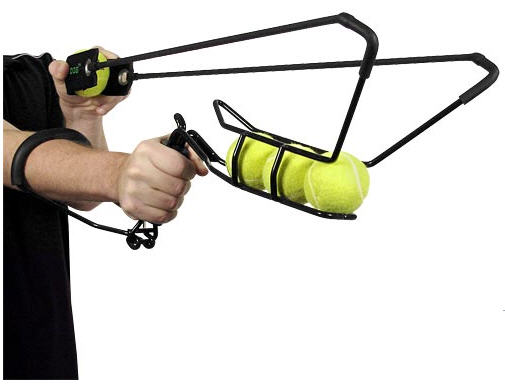 Tired of firing stones off your tiny slingshot?  Upgrade to the next level with the Hyperdog 4-Ball Launcher, which lets you send tennis balls coursing through the air at high speeds.

Sure, a tennis ball seems like lame ammunition.  However, this allows the manufacturer to peddle it to different markets.  While you can use it to attack oncoming aliens, it lends itself equally well to practicing your tennis swing as well as playing with your dog in the park.  Great for alien invasions and great for happier times too.

The Hyperdog 4-Ball Launcher is a powerful, rust-resistant steel slingshot that propels 2.0375-inch diameter tennis balls at a distance of up to 220 feet.  Designed for comfortable use, it comes with a foldable body (for easy storage), handy pistol grip and protective forearm padding.

It can carry up to four balls at a time on an integrated rack, so you can shoot up to four unwanted visitors without reloading, as well as confuse the heck out of your dog who will likely have a hard time deciding which ball to go after first.  A hands-free quick reload mechanism lets you pick up balls from the ground, which is great when playing with excessively-drooling mutts (no stinky hands).

Again, tennis balls are lame ammunition.  In the event of an alien attack, make sure you load some other stuff. Suggestions are welcome.  For a potential weapon, it’s mighty cheap at $32.50.