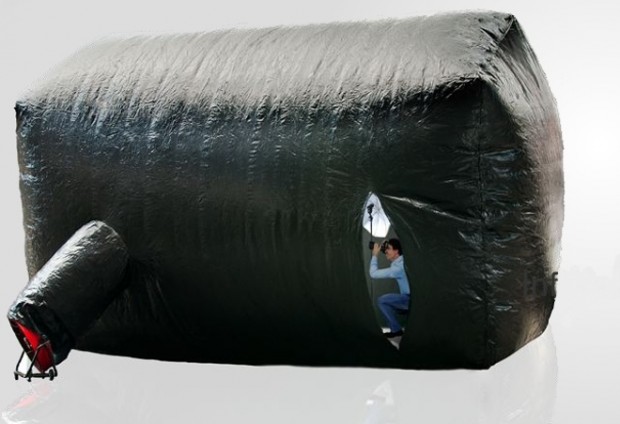 Setting up a portable studio usually means pitching a big tent that you carry around in the back of a truck.  If lugging around that much equipment sounds too much of a hassle, you can go with the alternative: the Inflatable Photo Studio.

An inflatable tent, it can deflate and fold into a box measuring 2 x 2 x 4 feet, allowing for easier transport than more conventional alternatives.  When blown up, it unfolds into a large open space, where you can set up your gear and take pictures in a more controlled environment.

The Inflatable Photo Studio looks like one of those big, bouncy castles kids play on, except it’s not bouncy and it’s clad in a nondescript black color.  A fan which blows on the tent from the side needs to run the whole time to keep it inflated, so you’ll need a power source to use it.  There are two zippered doors on the side where you can make a quick escape, in case the whole thing collapses (it will happen when power to the fan is cut off).

It comes in two sizes, small (12 x 7 x 10 feet) and large (20 x 12 x 12 feet).  Both are constructed using a half-inch thick plastic material, which should be thick enough to block out sunlight.

Of course, the necessary question: why set up an indoor studio outdoors?  We’re not exactly sure.  Maybe the landlord kicked you out of your actual studio, so you’re stuck with a makeshift one in an abandoned parking lot or something.  At any rate, the Inflatable Photo Studio gets you an instant controlled facility for cheap, priced at $330 and $400 for the small and large, respectively.  Fans are sold separately.