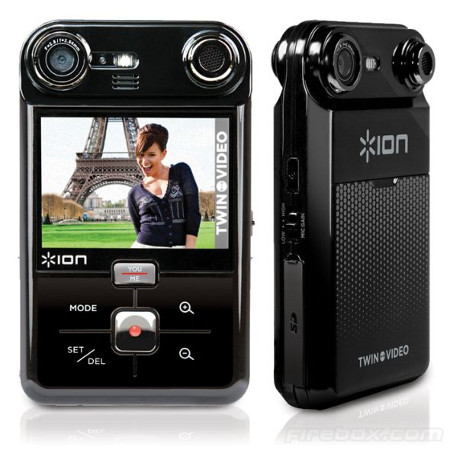 Sometimes, a video’s as much about what’s being shot as it is with the dude taking them.  I mean, have you ever wondered how the Double Rainbow video would have looked like if it included self-shots of the guy narrating it?  If “Bear” Vasquez only used the Ion Twin Video Camcorder, we wouldn’t have to be left in the dark.

Armed with two cameras, the compact shooter records from both the front and back.  That way, you don’t only capture the action in front of you, you can watch your own reaction right next to it.  Again, imagine just how much more epic the Double Rainbow  clip would have become when filmed in that way.

The Ion Twin Video Camcorder is a pocket camcorder, similar to the Flip and all the copycats that showed up along the way.  Both front and rear cameras can record in VGA quality, with 3X zoom, directly to a loaded microSD card (video files are stored separately, though).  Not only does it have two lens, it’s got dual LED lights, so you can shoot in acceptable quality even while indoors.

There’s a small colored LCD right on the body of the device, where you can play back recordings and watch the frame while you’re shooting.  Sadly, it can’t display nor save videos from both front and rear side by side, which would have been the logically awesome feature to have.  It comes with a remote, along with a miniUSB port and a TV out.