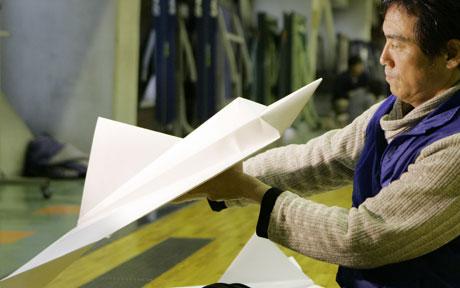 A Japanese engineer, Takuo Toda, just set a new world record for paper airplane flight, creating a pulp craft that soared above ground for 27.9 seconds.  The chairman of Japan’s Origami Airplane Association, the feat was achieved during a competition last month at the Hiroshima Prefecture.  Going by without a name, the plane has just been recognized by the Guinness World Records as running the longest-ever flight by a paper aircraft.

Just like old paper planes we used to make as kids, Takuo built his winning creation with a single sheet of paper.  The design featured no cuts, whatsoever, while spanning 10 cm from tip to tail.  Not content with this recent success, the record-holder disclosed his intentions to break the time again during another paper plane event in September.

I have no idea how any paper plane can pull that off – 27.9 seconds seems unbelievably long, considering the best ones I’ve created back in the day probably stayed in the air for no more than 5 seconds.  Obviously, he worked some engineering computation voodoo into that design, the variety the math-challenged among us (like…errr….me) would find impossibly boring (not that paper planes are exceptional entertainment, in the first place).

Before you develop the notion that the engineer is wasting his talents on children’s fare, worry no more.  According to Mr. Toda, the achievement was merely one of the many steeping stones he needed to fulfill his future ambition of launching paper planes from space.  Really.