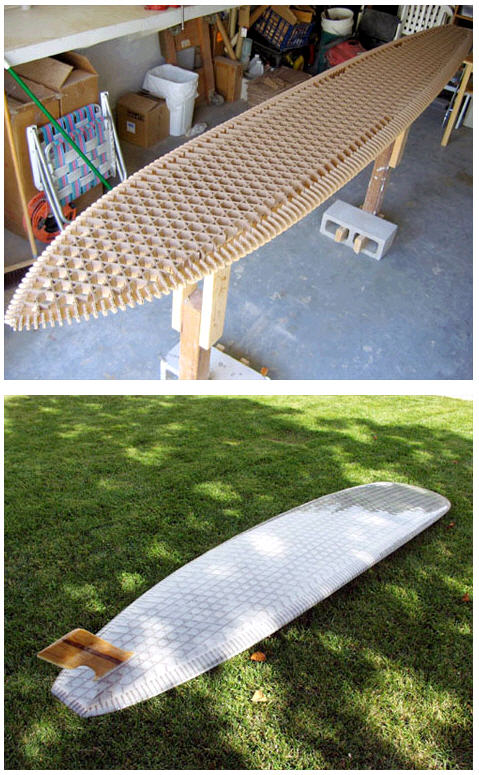 Foams and composites have long been the materials of choice for building boards that survive the rough waves.  However,  modern methods used to build them don’t lend themselves well to those on tighter-than-usual budgets.

That’s why when SoCal surfer Mike Sheldrake, who was forced to retire his 13-year old board due to damage, went on to build himself a new one, he set out to look for a cheaper alternative.   The result are surfboards that employ a structural approach that he calls the “quarter isogrid”, a notched rib assembly that is simple yet sturdy.  While he originally meant to use cardboards as a test material (planning to use wood for the final prototype), he ended up sticking to it due to its light weight and ample strength.

You read that right – Mike’s surfboards use sheet cardboard at its core.  Employing the aerospace-technology-based design pattern he developed, they manage to perform at par with more traditional counterparts.  Among the product’s early customers, in fact, was pro surfer Alex Knost, who once remarked (in reference to a Sheldrake surfboard) that “the board rides unbelievably well.”

While Mike isn’t selling fully-built cardboard surfboards yet (he’ll probably need a full production line for that), he does make the “core kit” available for customers interested in putting together one of their own.  Kits for funboards, shortboards, noseriders and step decks are currently available, along with instructional videos on how to use them to build your own board.  Of course, you’ll need to finish it with a fiberglass sheet afterwards, so figure out how to get that done too before sending in for a package.