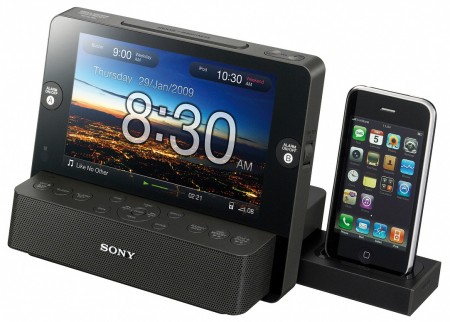 Your alarm clock sucks.  Not that it’s all bad.  It’s just that the Sony ICF-CL75iP Dream Machine is so much better.  More than an alarm clock, it’s a veritable nightstand entertainment center.

Versatile and multi-featured, the new device is designed to provide you a complete range of bedside favors.  Want to wake up to a video? Done.  Want to fall asleep to soothing music?  No problem.  Want to keep a slide show of family photos on a picture frame?  It’s right there.

It fits in a 7-inch display (with an 800 x 480 pixel resolution), built-in speakers, 1GB of internal memory, USB connectivity and a retractable iPod dock.    You can be roused from bed by the integrated AM-FM radio, saved files from the onboard storage (or docked devices), pre-installed nature sounds or a 10-second personal voice recording.  Supported media formats includes audio (MP3, WMA), video (MP4, AVI) and images.

As far as bedside entertainment goes, this slides right in at the top.  It’s easily more well-rounded than any of Sony’s previous Dream Machine releases, along with much of the offering in the market.   While it skimps on Wi-Fi and internet radio, you should be able to handily pop an iPhone or an iPod Touch in the dock, getting the functionality by default anyway.

There’s no official release date for the Sony ICF-CL75iP Dream Machine, but price is slated for $150.