The Pink Bunny of Colletto Fava 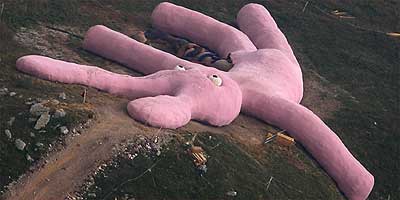 There are a lot of awe inspiring and cool sites to see all over Europe. In Italy there are hundreds of must see sites that should feature on any tourists vacation agenda. One of the newest attractions in Italy however, is somewhere between very cool and very strange. It has little to do with country’s ancient history or its religious heritage, like many of the other great Italian tourist destinations.

On the side of Colletto Fava, which is a 5,000 foot mountain in the northern hills of the country, a 200 foot long toy bunny has been laid out for all to see. The pink rabbit looks quite a lot like Harvey’s long lost cousin, but with somewhat more substance. He (or she, that issue needs clarification) was created by a Viennese art group who go by the name of Gelitin. According to the groups publicity materials the giant bunny, who does not officially have a name, was designed to appear as if it was knitted by “dozens of grannies” from pink wool. The rabbit first hit the hillside in 2005, and according to his/her creators should be in situ on the hillside until at least 2025. Although one wonders how it will not have become a sodden mess of material by then, given northern Italy’s rainy climate, even though the artists claim the materials used are “practically” waterproof.  Hikers and tourists are encouraged to scale the oversized stuffed animal and even to lie down for a nap or picnic on the wooly carcass.
From the air, the rabbit is an extraordinary site; Google Maps can spot it even from space. The whole sight is almost a Gulliver in Lilliput type scenario, which according to one of its creators, Wolfgang Ganter, was the whole idea.
According to Ganter, the pink bunny should make the visitor feel “happiness and wonder” as they explore it, making them feel “as small as a daisy”, which it does for a while until you reach the massive side of the artificial rabbit. Now you get to see knitted intestines and other assorted bodily organs that have been fashioned to appear as if they are spilling from your new friend’s side. Then the observer is forced to realize that this happy bunny is not so jolly after all. It has actually supposed to appear as if it has fallen to its doom from the sky. Poor Harvey Mk 2 is actually a goner.  Not such a cheery thought. Probably not quite the holiday destination for small children or sentimental grown ups, but a very cool spot for the rest of us indeed.