The Truth Wristband: Your Very Own Portable Lie Detector 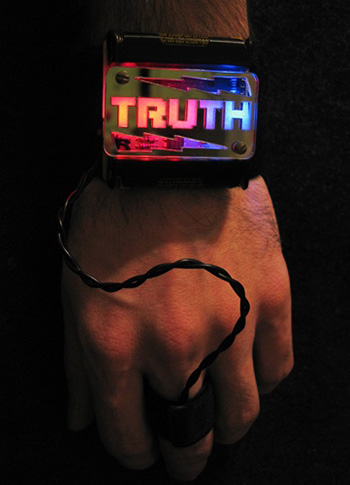 We have portable gadgets for pretty much everything now, but never really had one that compels you to tell the truth.  If you’ve been playing “Liar, Liar” like Jim Carrey was before his transformation in that movie, the Truth Wristband might just be what helps you out of your perpetual fibs.

A wearable device much like a regular wristwatch, this one might prove a little bit harder to don.  Apart from the fact that it’s a veritable eyesore on your arm, the face plate changes colors from blue to red anytime your body composition changes to compensate for lies coming out of your mouth.  That’s right – now, everyone will know what’s up every time you talk about your imaginary girlfriend.

According to the makers, the Truth Wristband takes your psycho-emotional response to stimulus and displays it for the world to see.  It measures a marker of emotional arousal called the galvanic skin response, which can change in a rapid manner once your skin begins feeling the shivers as a result of an uncomfortable situation.   Of course, the device will probably turn up the same measurements whether you’re lying, self-conscious or just flat-out embarrassed about something.    Doesn’t make it any less fun, though.

What would happen if everyone in the world told the truth?  Beats me.  Wearing a Truth Wristband, however, you can start all the truth-telling with the man in the mirror – finally, you can admit you’ve been a misanthrope for so long because you’re an alien from another galaxy.  It’s currently sold as a DIY kit (moderate soldering skills required), with all the parts and instructions available for $45.