Whether they’re in movies, video games, or comic books, miniguns are always awesome. There’s just something special about an oversized handheld weapon with a rotating drum barrel that makes you want to pay attention. And since actual miniguns don’t actually make any kind of sense in real life, the best chance you’ll have of owning them is through toys. You know, like the foam-firing Nerf Titan CS-50.  And this fully-automatic Rubber Band Minigun.

Made by Weaponized T-Rex, it’s a rubber band blaster that, according to the outfit, is constructed according to the “Gatling Machine Gun Principle.” What is that? We have no idea, considering the Gatling gun isn’t technically a machine gun, but we’ll take it. And it’s still awesome. 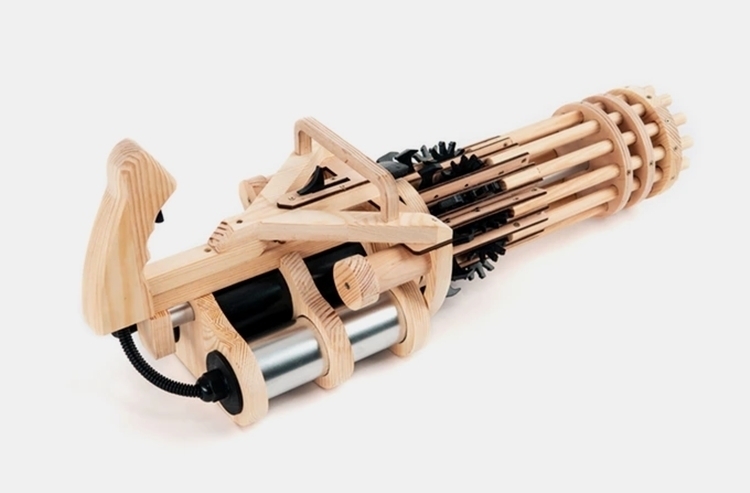 The Rubber Band Minigun is a rubber band blaster that can hold 144 rounds of ammo at any one time, allowing you to carry a good load of shots that you can unleash at any unfortunate target. Equipped with electric motors powered by AA batteries, the blaster is fully-automatic, giving you the ability to unload the entire supply of ammo in a single attack. Pulling the trigger, by the way, activates the motor, causing the drum to rotate, although you’ll still have to press the pusher if you want it to release any rubber bands. We know, that sounds tedious, as you’ll have to keep your fingers on two separate controls.  Doing it this way, however, allows the barrel to rotate without having to waste any ammo, allowing you to enjoy the thrilling sight of a dozen spinning barrels.

This same firing design also makes it easy to control the rate of fire, since you can keep your finger on the trigger permanently, while only pressing the pusher when a shot is lined up correctly. The drum, by the way, can be rotated even without rubber bands onboard, so you can show off the rotating mechanism to your friends without having to load the darn thing. The Rubber Band Minigun can be loaded in a pretty straightforward manner. You hook one end of the band to the front end of the barrel and the other end to the notched wheels at the rear, with each barrel carrying up to a dozen rubber bands each. Can you double or triple the rubber bands on each notch of the wheels? Sure, but we imagine it can get pretty chaotic with two or three bands flying concurrently, so it might affect your shot accuracy.

Construction is CNC-machined wood for the entire blaster, with the motors housed inside a pair of metal cylinders. It comes in two models: one unfinished and one coated with black acrylic paint. You can get it pre-assembled, so you can start firing rubber bands out of the box, although there’s also a kit version if you prefer doing any assembly. The kit comes with 70 individual parts, with assembly estimated at around one to two hours.

A Kickstarter campaign is currently running for the Rubber Band Minigun. You can reserve an assembled unit for pledges starting at $99.