Few toys can tickle children’s minds better than dinosaurs. Suffice to say, the prehistoric
beasts capture the imagination in ways few toys can manage. As popular as dinosaur toys have been in the past, though, the success of the Jurassic Park and Jurassic World movies have blown the whole thing through the roof, with the prehistoric creatures now coming in a wide and varied selection of playthings. Right now, these are our favorite dinosaur toys. Quite possibly our favorite dinosaur toy right now, this little dino is designed to wrap itself around your finger like those pictures of little monkeys that have made the rounds online. More than a mere static toy, the raptor can chomp its jaw, let out three dozen different sounds (that range from sweetly purring to angrily roaring), and even pass gas (well, something that sounds like it anyway), all of which it performs as a reaction to being touched, hearing sound, and detecting motion in its immediate surroundings. Seriously, this one’s impossibly adorable, with its interactivity being particularly engaging, since the darn things can develop a personality depending on how you interact with it over time. Make one angry all the time, for instance, and watch it grow easily irritable as time passes. This hand puppet puts the head of a monstrous dinosaur on your hand, allowing you to chomp away at everything in sight while moving its gaping jaw in time with the roaring sounds you make. If you like hand puppets, enjoy pretending to be a dinosaur, or just love the idea of having a giant dinosaur head whose eyes you can stare down when you get bored, this will definitely do the trick. It comes in two variants, a T-Rex and a velociraptor. 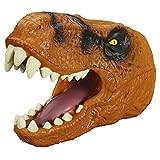 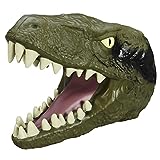 Quite possibly the most absurdly crazy dinosaur toy we’ve ever seen, it’s a half-robot T-Rex that’s been weaponized using some ridiculous technology. And by ridiculous, we mean the darn thing shoots arrows out of his mouth and launches ice bombs out of cannons in its torso, all while marching forward accompanied with terrifying sound. Plus, it does all that while LEDs all throughout its body light up. Seriously, if dinosaurs evolved this way, they would have easily survived the Ice Age. 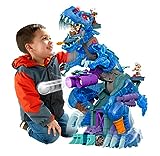 A tamer, more level-headed version of Imaginext’s robo-dinosaur, this T-Rex comes with some articulation, allowing it to bend down to chomp at die-cast cars, minifigures, and whatever other small toys are lying around. A handle on the back allows you to control the creature’s posture, making it bend down and stand straight up with a simple push and pull, while a trigger on the handle activates the chomping action, so you can have it gnawing at anything on cue. LEDs in the eyes and mouth can be activated with the push of a button, with the eyes transforming from green to red and back with each press. It includes a toy figure of Owen and his Jeep Wrangler for the dinosaur to rip into shreds. 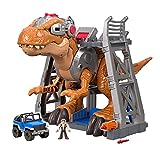 A three-foot long T-Rex that can swallow smaller action figures? That’s exactly what they made here, so you can lay out all your minifigs, green army men, and other small toys for this monster to feed on. It has articulation on the shoulder and legs, so you get some options in poses, but the real fun here is watching the darn beast eat everything in sight. A door on the belly allows you to easily retrieve any toy it feeds on, with enough room in the stomach to accommodate approximately 20 small toy figures. Seriously, that’s a lot. 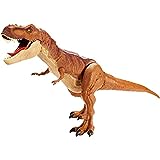 If you just want dinosaur models done up in exquisite detail without any accompanying articulation or mechanical components, you can’t go wrong with Schleich’s large inventory of dinosaur models. Ranging in price from $4 upwards, the models are some of the most accurate recreations of the prehistoric animals we’ve seen, in poses that capture them in all their well-deserved glory. Suffice to say, if you’re thinking of collecting dinosaur models for showing on a shelf or populating a tabletop jungle, these guys have all the variety and attention to detail you definitely want. Want to dress up like a dinosaur for a day (or maybe the rest of your life)? Well, step right into one of Rubie’s adult-sized dinosaur costumes, all made from inflatable jumpsuits that craftily manages to embody the likeness each creature without the complications typically presented by traditional dinosaur costumes. Because it’s inflatable, you literally look like a storefront display, which, we guess, helps build the element of surprise when people see you suddenly moving their way. Simply put, this offers a great balance between fun and affordability as far as dinosaur costumes are concerned. They have costumes to dress you up as a T-Rex, a pteranodon, a triceratops, and a velociraptor. This baby T-Rex is an interactive toy that can respond to interaction with over 35 sound-and-action sequences. He hops when excited, makes slurping sound when enjoying food, and screams “yucky” while spitting when he’s given a crappy-tasting treat, along with a whole host of other responses that make it feel like a true living creature.  With sensors on the head and mouth, it can recognize when it’s being petted, fed, and waved at, so it knows exactly when to interact and when to stay quiet on the shelf. And, yes, it’s a plush doll, so you can squish it all you want.

9. MindWare Dig It Up! T-Rex and Triceratops

Of course, dinosaurs are all extinct. As such, all we have are skeletal remains that people dig up, piece together, and display in museums. If you try your hand at that, you can pick up this set from Mindware, which lets you excavate dinosaur bones from a big slab of clay, then assemble them into an accurate skeletal model. All the bones are designed to snap-on, by the way, so no need to mess with glue, although you will need to spend some time figuring out which bone goes exactly where. When finished, the T-Rex skeleton measures 14.5 inches long while the triceratops model spans all of 12 inches. Oh yeah, all digging tools are included, so no need to dig into your toolkit. Like WowWee’s Zoomer dinosaurs, this beast comes with wheels on its feet, allowing it to move considerably faster than traditional dinosaur toys, making it really enjoyable to operate using the handheld controller. It comes articulated and responds to motion gestures with various movements and sounds, including blinking, chomping, roaring, and destroying everything in the room. Well, not the last one, but it would have been fun if it could. It can even serve as a guard that alerts you of movement in a room and issues a warning to whoever’s present. If you’ve ever thought of racing dinosaurs or battling them, this could be the best bet for either type of gameplay.