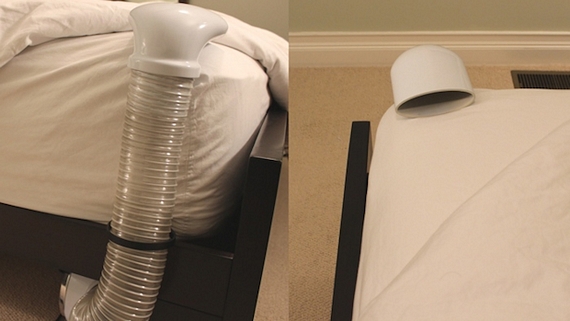 Foul weather, whether it’s too hot or too cold, is an all-night problem. However, it becomes especially annoying when you’re trying to sleep and can’t because your body just can’t seem to settle in. The Bedjet is a new climate control appliance that aims to help with that.

Designed by Mark Aramli, a former spacesuit engineer for NASA, the device will latch on to the side of your bed then blow either cool or warm air between the sheets. Why waste energy cooling or heating the entire bedroom, after all, when the bed is all you really need to get at just the right temperatures? 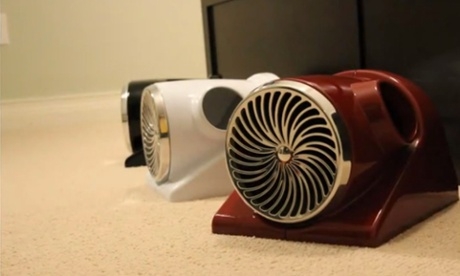 The Bedjet is, basically, a tiny fan that you can use to cool down the bed during summer and warm it up during these cold winter nights. It works by generating a cushion of air between the sheet and your Astronaut Duvet, causing a tenting effect that allows air to spread across the bed at even temperatures. Granted, your electric blanket can probably warm the bed just fine during cold months, but the Bedjet bests it via efficiency, warming the bed to desired temperatures in only three minutes, apart from being viable for summer use, too.

It won’t self-regulate because it’s not smart (boo), but they do have an auto-shutoff setting that lets you limit how long it will run (they suggest between 3 to 8 minutes — any more can turn the bed too hot or too cold). The resulting energy consumption for this kind of usage is estimated to be around the same as turning on an electric blanket for an hour, with potential for savings because you can lower all the other climate control devices around the house at night (since you’re supposed to spend that time in bed). It includes a wireless RF remote control, so you can turn it on without having to reach over, although smartphone control functionality is a possibility down the road (integrating WIFi will spike up costs, so they’re avoiding it in the meantime).

Bedjet is currently collecting funds for a production run on Kickstarter. Pledges to reserve a unit starts at $249.